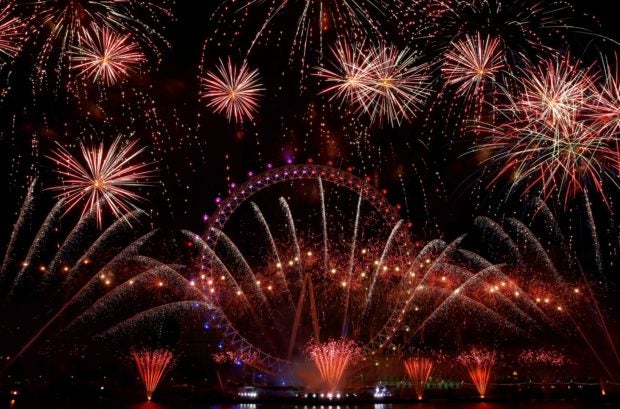 Fireworks explode around the London Eye during New Year’s celebrations in central London just after midnight on January 1, 2019. AFP

Fireworks, concerts, spiritual services and political addresses marked the transition to 2019 as revelers around the globe bid farewell on Monday to a year filled with challenges.

Here’s a look at how people around the world ushered in the new year:

In Thailand, hundreds of Thais traveled to Takien Temple in a suburb of Bangkok to lie inside coffins for traditional funeral rituals.

Participants believe the ceremony symbolizing death and rebirth helps rid them of bad luck, and allows them to be born again for a fresh start in the new year. They held flowers and incense in their hands as monks covered them with pink sheets and chanted prayers for the dead.

“It wasn’t scary or anything. It is our belief that it will help us get rid of bad luck and bring good fortune to our life,” said Busaba Yookong, who came to the temple with her family.

In London, Britons ushered in the new year with the familiar chimes of Big Ben, even though the world-famous clock has been disconnected for more than a year because of a conservation project.

Parliament announced last week that the clock’s massive bell would sound to mark the new year with the help of a specially built electric mechanism to power the hammer, which weighs about 440 pounds (200 kilograms). The clock mechanism, which has kept time since 1859, has been dismantled as part of the renovation work.

New Year’s Eve without Big Ben would be positively un-British. The comforting chimes are used by TV and radio stations throughout Britain to herald the moment of transition from the old to the new year.

The beach was lit up with hundreds of thousands of mobile phone screens as the massive crowd recorded the fireworks spectacle.

The Pacific island nation of Kiribati was the first in the world to welcome the new year, greeting 2019 with muted celebrations after spending 2018 on the front line of the battle against climate change.

Kiribati is made up of low-lying atolls along the equator which intersect three time zones, the first of which sees the new year 14 hours before midnight in London.

Much of the nation’s land mass, occupied by 110,000 people, is endangered by rising seas that have inundated coastal villages. The rising oceans have turned fresh water sources brackish, imperiling communities and raising doubts the nation will exist at the next New Year.

Former President Anote Tong said the only future for Kiribati may be mass migration.

In Times Square, New York City, drenching rain didn’t stop crowds from packing the area ahead of the made-for-TV extravaganza, although bad weather forced police to scrap plans to fly a drone to help keep watch over the crowd.

This year, the Times Square Alliance, the business association that organizes the event, is paying a special tribute to press freedom as part of the festivities, after a year in which journalists have come under attack around the world, including in the United States.

A minute before midnight, an invited group of journalists joined Mayor Bill de Blasio in pushing the button to initiate the ball drop.

In the Indonesian capital Jakarta, more than 500 couples tied the knot in a free, mass wedding organized by the government to mark the arrival of a new year.

Fireworks shows, however, were canceled out of respect for victims of a Dec. 22 tsunami that killed more than 400 people.

Read Next
Gov’t asked to spare all medicines from 12% VAT
EDITORS' PICK
PH preps for China virus: Question of when, not if
Beyond water service: Maynilad builds massive infrastructure projects to clean up Metro Manila waterways
Museums ‘put to sleep,’ churches closed amid volcano’s unrest
Seventh judge assigned to handle De Lima case
SM continues to send relief assistance to remote towns in Batangas
Get exciting deals and discounts when you download the new McDonald’s App
MOST READ
Taal Volcano flexes signs of restiveness anew
Passengers from Wuhan, China to be flown out of Kalibo, Aklan – CAAP
Part of Aurora Boulevard in Cubao closed from Jan. 25 – Feb. 1
Lacson on Duterte’s threat to end VFA over Bato’s canceled visa: Where is the connection?
Don't miss out on the latest news and information.