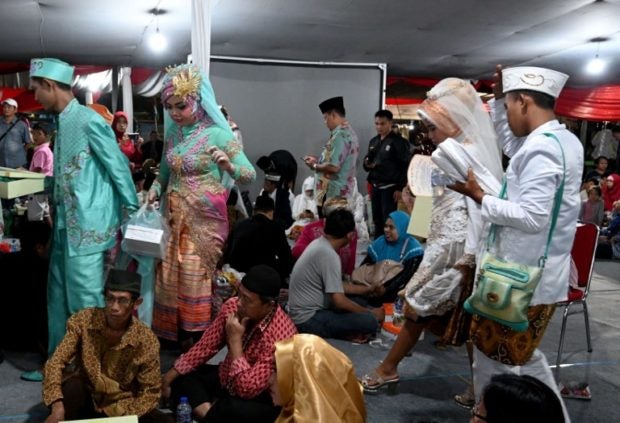 Wedding couples wait for their turn to be solemnised as they join over 500 other couples in a mass wedding event in Jakarta on December 31, 2018. (Photo by GOH CHAI HIN / AFP)

JAKARTA — More than 500 Indonesian couples tied the knot on New Year’s Eve at a free mass wedding held under tents in pouring rain in the capital Jakarta.

The city’s government organized the event for poor families, who often do not have official documents such as birth or marriage certificates.

New Year’s Eve was chosen so that “if they celebrate their wedding, everyone will celebrate it. The whole world”, he said.

Rohilah, who like many Indonesians goes by one name, told AFP she was overjoyed that she was now legally married to Dahrun Hakim, with whom she has a four-year-old daughter.

Due to financial constraints, the couple had previously only been married under Islamic law, having been wed by an Imam five years ago — a union not considered official in Indonesia.

“I am happy. I am really happy,” Rohilah told AFP.

“Now I can make a birth certificate for my daughter so she will be recognized by the state,” she added.

The oldest groom at the event was a 76-year-old man and the oldest bride was 65, while the youngest pair was 19 years old.

It was the second time the Jakarta government has held a mass wedding on New Year’s Eve but to respect the victims of recent disasters in the archipelago, fireworks shows have been cancelled.

Towns in nearby Banten province, which was hit by a tsunami on December 22, killing more than 400 people, have also cancelled their New Year’s celebrations to honor the victims.