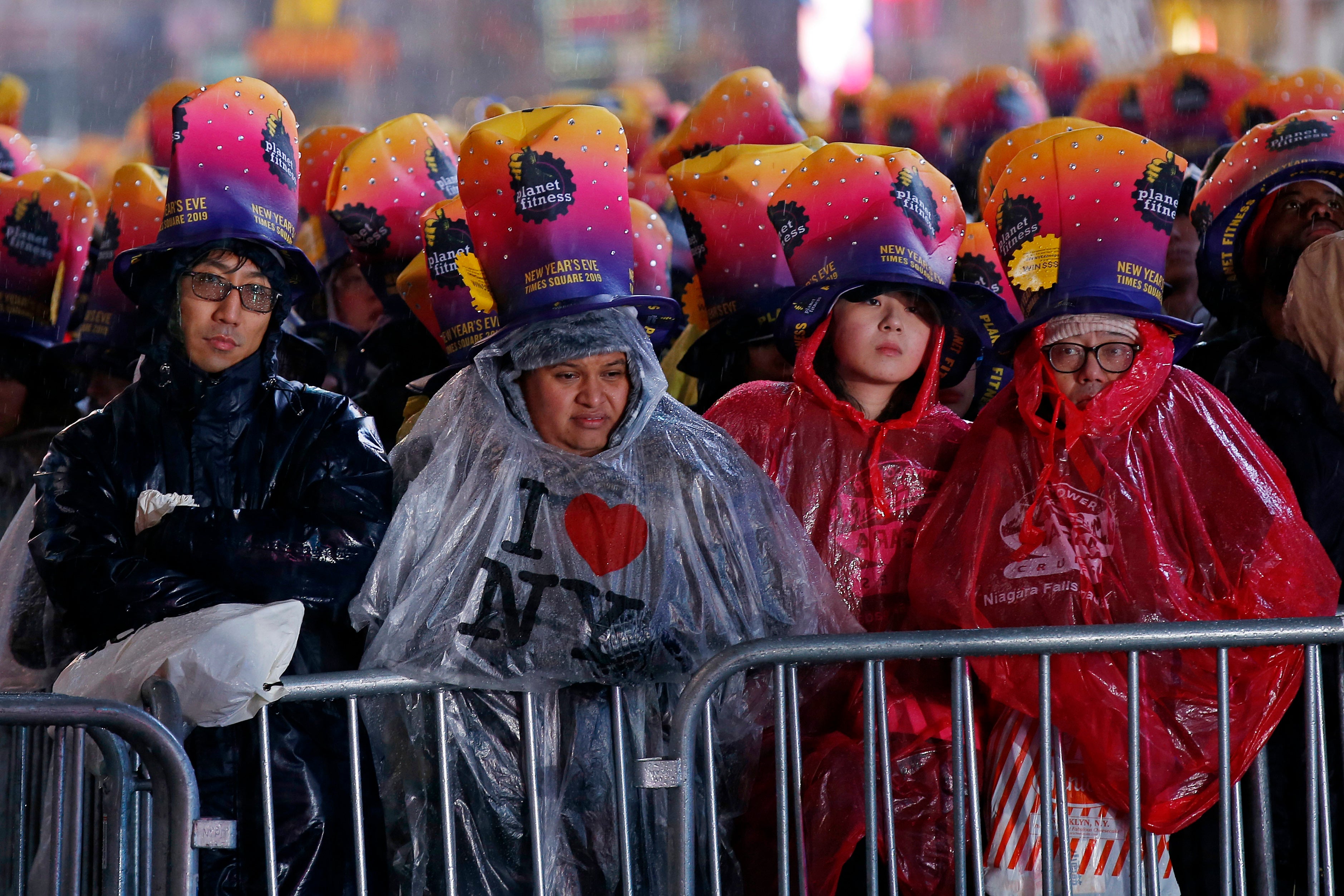 Revelers wait in the rain in New York’s Times Square, Monday, Dec. 31, 2018, as they take part in a New Year’s Eve celebration. AP

NEW YORK, United States — A drenching rain didn’t stop revelers from packing Times Square for New York City’s New Year’s Eve celebration Monday night, with much of the crowd determined to have a good time as they waited hours for performers including Christina Aguilera, Sting and Snoop Dogg.

Some people danced to keep their blood moving. Vendors gouged the unprepared, charging up to $10 for ponchos that ordinarily sell for $2. The biggest cheers early on were for event workers handing out foam hats and blue gloves.

The Times Square party is always a marathon, with often cold temperatures, security rules, hours-long waits and a lack of public toilets. Veterans of the celebration said the rain wasn’t all that bad.

“We’re troopers. We got this,” said Nyia Williamson, 41, who was at the party for the 11th time and had come in from New Jersey to see New Kids on the Block perform.

Rain, she said, is better than bitter cold. Last year’s party was one of the coldest on record at 10 degrees Fahrenheit (-12 Celsius). This year, the temperature was about 45 degrees (7 Celsius) at 8 p.m.

The final 60-second countdown happens as a geodesic sphere — 12-feet (3.5-meters) in diameter, covered with 2,688 Waterford crystal triangles and lit by 32,256 LEDs — drops down a pole. The numerals “2019” light up at midnight accompanied by pyrotechnics and the release of 3,000 pounds of confetti.

Larissa Duke, a 22-year-old college student from Ontario, Canada, wrapped herself in a garbage bag and placed the top of an umbrella on her head to stay dry. Umbrellas were banned from the celebration for security reasons, so Duke had to discard the umbrella’s shaft at a checkpoint.

“I was here last year and loved it so much I had to come again,” Duke said. “The energy here is really just what keeps you going.”

Justine Brenkel, 26, from Lyon, France, said being in Times Square on New Year’s Eve was on her “bucket-list.”

“It’s unique. It’s magic. It’s New York,” she said — but the hours of waiting were turning it into a bit of a disappointment.

“When we watch it on TV, it looks so much fun, there’s so much animation,” said Brenkel, who was attending the festivities with two friends. “But we’re waiting for the show to start.”

As always, the celebration is taking place under tight security, with partygoers searched at checkpoints and herded into pens ringed by metal barricades.

Thousands of police officers patrolled with the help of bomb-sniffing dogs, 1,225 security cameras and 235 “blocker vehicles” used to stop potential vehicle attacks. Police had planned to send up a drone to keep an eye on the festivities, but officials scrapped the flight due to the rain.

“It seemed like airport security,” said Lisa Carron, a 39-year-old preschool teacher also from Ontario. “That should keep us safe.”

Once people enter the security pens, they can’t come and go. So every year, a few restaurants in the square make deliveries. The Times Square McDonald’s sent employees out with trays and menus to take orders.

Carmen Diaz, one of the workers delivering food, yelled “Happy New Year’s” as she twirled on the sidewalk in a pink, cardboard fedora.

Husband and wife Bobby and Shivaraj Dhillon, from Watford, England, kept their spirits high by dancing to music playing over loudspeakers.

Shivaraj said she had a serious medical operation this year and that she and Bobby are planning on starting a family soon, making this New Year’s Eve a perfect chance to do something adventurous.

“This is probably up there with my wedding day,” Shivaraj said. /cbb