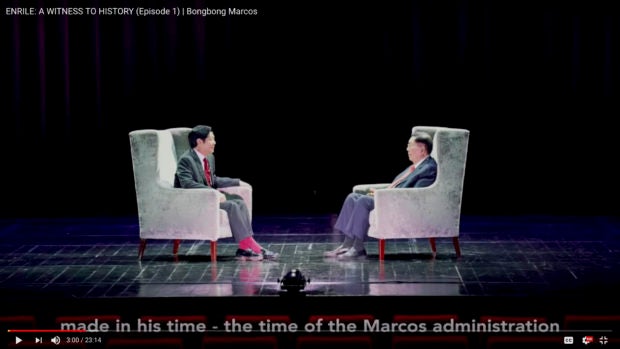 The video was posted on Marcos Jr.’s Facebook page a day before the 46th anniversary of his father’s declaration of martial law. It had Enrile belying accounts that as many as 70,000 activists, opposition figures, labor leaders, students, teachers and community organizers were jailed by the regime he had served as defense minister.

Overnight, social media was flooded with testimonies from former detainees, some raising one particular point: How can Enrile make that statement when he himself—in his post-Marcos career—supported legislation providing compensation for the victims of martial law abuses?

Enrile later claimed that his statement was just “twisted” by Marcos critics.

The two-part video made other claims about the Marcos years, which were later spread on social media by “news” sites identified with the strongman’s children.

Such apparently well-funded efforts, however, didn’t go unchallenged. To counter Enrile’s denial, for instance, concerned netizens promptly posted an Amnesty International report from 1982 that listed about 50,000 people who were arrested, mostly without formal charges, in the first three years of martial law alone.

Other posts sought to demolish the image of a benign martial law era that was being projected by pro-Marcos sites, by recounting the massacres that took place in the coastal village of Palimbang, Sultan Kudarat, in September 1974, and the killing of at least 42 people in Bingcul village (official reports cited its location as “somewhere in Mindanao”) in November 1977.

At present, Marcos Jr.’s social media accounts are being managed by Franco Mabanta, who describes himself on Twitter as a “social media strategist to the big boys.” Also a known supporter of President Duterte, Mabanta is currently facing four libel cases stemming from posts he made on Facebook.

One of those posts was an attack on Jover Laurio, the woman behind the satirical Pinoy Ako Blog, whom Mabanta described as “profoundly disgusting” and “hideous”—an “Ogre Lady.” Mabanta also accused Laurio, a staunch critic of the Duterte administration and the Marcoses, of being on the payroll of the “Yellows” or the Liberal Party and other allies of the Aquino family.

The pro-Marcos sites also try to portray the martial law years as the country’s golden age of development and infrastructure. They also pointed to the so-called “Marcos gold” as the source of the dictator’s immense wealth, which the Supreme Court estimated to have reached $10 billion when he was in power.

The Facebook page “Marcos Cyber Warriors” claims that the Cojuangco-Aquino family was just envious of Ferdinand Marcos’ personal riches, which it said was given by his former law client, the “Maharlikan (noble) Tallano family,” supposedly the true owner of the Philippine archipelago.

According to the site, the Tallanos paid Marcos 192,000 tons of gold and that the late president also got hold of the “Yamashita treasure,” the hoard allegedly buried by Gen. Tomoyuki Yamashita of the Japanese invading forces during World War II.

In a media interview she gave in 1992, Ferdinand’s widow Imelda Marcos, now an Ilocos Norte congresswoman, maintained that the Marcos gold bars came from the Japanese. Speaking to the Inquirer six years later, she said her husband already owned gold bullions even before he entered politics. (Imelda was convicted of graft by the Sandiganbayan last month.)

For about a month, the website Maharlika consistently posted material in praise of the late dictator, while rehashing Bongbong’s accusations of election fraud in the 2016 vice presidential race that he lost to Leni Robredo.

Another page, one called “Ferdinand Emmanuel Edralin Marcos,” asserts that “it is a Filipino trait to have long memories on the mistakes one has done and short memories on the good one has accomplished.”

It further muses: “This axiom defines the invictus of President Ferdinand Marcos. The fictioned (sic) awful acts attributed to him and to his family shunned his achievements and contributions to our country.”

According to Francis Gealogo, a history professor at Ateneo de Manila University, attempts to rewrite Philippine history to suit specific interests are nothing new. During the Filipino-American War, for example, Filipino revolutionary leaders like Macario Sakay, Miguel Malvar and Vicente Lucban were branded by the American colonial rulers as mere bandits.

Historical revisionism, Gealogo said, involves not just tinkering with facts but the interpretation of facts.

In the case of Marcos, he said, this is being done by focusing the spotlight on his “achievements”—like the construction of San Juanico Bridge in Leyte and the Bataan Nuclear Power Plant, and the enactment of the law granting 13th month pay—while blocking out the repressive atmosphere in which such milestones were accomplished.

“You do not reinvent the facts, you do not distort the facts,” said Gealogo. “But you present new information utilizing these facts. You suppress some of the details and highlight some factual considerations in your favor.”

“Marcos himself was known for being historically conscious,” he said. “He was known not only for his fascination with history, but also for (his obsession on) how his role and image should be projected.”

Gealogo cited the 1979 project “Tadhana (Destiny)” as among the Marcos attempts to refashion history to his liking. Employing the leading academics in the 1970s and 80s, Tadhana was an ambitious history writing project that aims to justify martial law and his New Society (Bagong Lipunan) as a logical conclusion to the evolutionary development of the Filipino nation.

Unfortunately for that undertaking, the internet was not yet around to push its agenda with the same viral speed enjoyed today by Maharlika and its ilk. Tadhana failed to make any deep or lasting impact on its intended audience, Gealogo recalled.

Decades later, however, the motives and schemes that propelled such a project not only have the technological tools to succeed where the Marcos patriarch failed—but can also exploit younger, still-malleable minds and a collective psyche with receding memories of martial law.

It could find a more receptive audience today, Gealogo warns, for “the (country’s) tragedies are sometimes so immense that we tend to favor activities aimed at forgetting as being more practical than memorializing or remembering.” —WITH A REPORT FROM KATHLEEN DE VILLA, INQUIRER RESEARCH

(Editor’s Note: This report was produced with a grant received for the Southeast Asian Press Alliance 2018 Journalism Fellowship Program from the Office of the United Nations High Commissioner for Human Rights (OHCHR). The views expressed here can in no way be taken to reflect the official opinion of the OHCHR.)