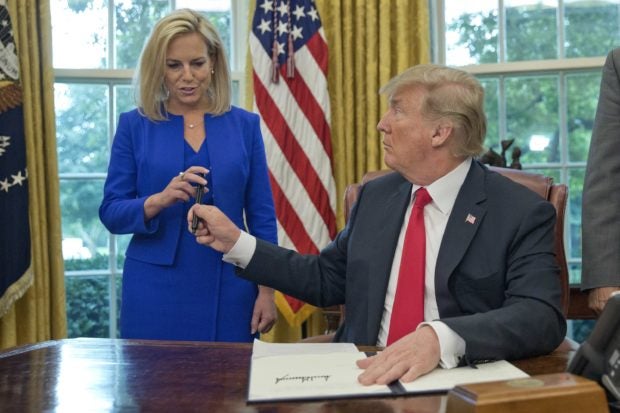 DETROIT—No collusion! (Or at least a lot less of it.)

That’s according to a Michigan school’s latest “List of Words Banished from the Queen’s English for Misuse, Overuse and General Uselessness.”

The politically charged term at the center of United States special prosecutor Robert Mueller’s investigation into whether President Donald Trump’s campaign coordinated with Russia is among 18 entries on Lake Superior State University’s 44th annual list, which was released on Monday.

University spokesperson John Shibley said the school received about 3,000 votes through its website and Facebook pages. Although Trump has repeatedly tweeted that there was “no collusion,” and “collusion” was among the top 3 vote-getters—along with “wheelhouse and “in the books”—its inclusion should not be interpreted as a political statement by the list makers.

Rather, voters apparently were just irritated by hearing and reading the word so often in the past year, Shibley said.

The other words or expressions that made the list are “wrap my head around,” “grapple,” “optics,” “eschew” and “thought leader.” Also submitted by the public for the pyre of popular parlance: “platform,” “ghosting,” “yeet,” “litigate,” “crusty,” “legally drunk,” “importantly” and “accoutrements.”

Two other political entries also made it: “Most important election of our time” and “Otus” acronyms such as Potus—for President of the United States. The acronyms that have found their way into cable news shows date back to the late 19th century, when Potus and Scotus (Supreme Court of the United States) were used as telegraph codes, according to Merriam-Webster. Flotus, for the first lady, first appeared in the 1980s.

Among the newest terms, yet one the curators feel has outlived its usefulness, is “yeet,” which variously refers to the name of a dance, a taunt, an excited acknowledgment, or throwing something.

Other words are commonly known in one setting, such as “litigate” among lawyers, but get trotted out by some politicians and pundits for hashing out “any matter of controversy,” according to one submission.

The list is meant to be in fun, but it’s bound to raise some hackles.

There was a “whiff” of legal concern back in 1994, when officials from the Los Angeles Lakers objected to the list’s inclusion of “three-peat,” Shibley said.

The team’s coach at the time, Hall of Famer Pat Riley, owned the trademark. Eventually, the team officials dropped their objections after determining that its inclusion on the list wasn’t “commercially flagrant.”

Some members of the public were upset at the 2002 inclusion of “9-11,” which received thousands of votes for banishment, Shibley said. It was deemed by nominators as “too much (of) a shorthand” for the tragic terrorist attacks of Sept. 11, 2001, but people misunderstood and thought the school was “thumbing (its) noses at 9/11,” he said. —AP