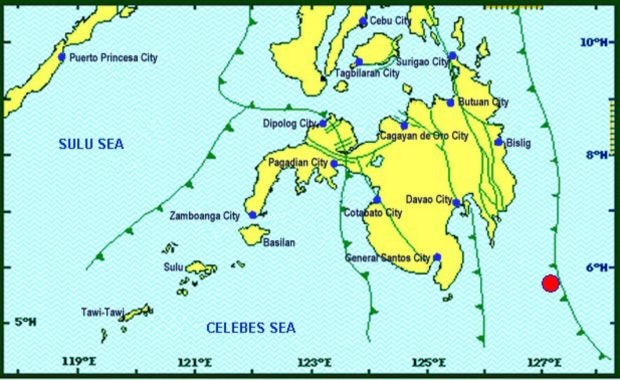 MANILA, Philippines – A 7.2-magnitude earthquake occurred off the coast of Davao Oriental on Saturday, the Philippine Institute of Volcanology and Seismology (Phivolcs) said.

Engr. Rommel Allan Labayog, Phivolcs Zamboanga City station chief, said the temblor, which was initially reported at magnitude 7.1, was strongly felt in the town of Governor Generoso at 11:39 a.m.

The United States Geological Survey reported the magnitude at 6.9 with an epicenter 84 kilometers (km) southeast of Pondaguitan, Davao Oriental.

Preliminary plotting made by Labayog showed that earthquake event has a depth of 49 km, 162 km southeast of Governor Generoso.

Labayog said the “shallow” quake was “expected to have damages.”

Phivolcs said aftershocks could be expected from the ground shake that was also felt in Davao City, Cagayan de Oro city and Zamboanga City.

In Phivolc’s updated earthquake bulletin, Intensities I to V was felt in the following areas: