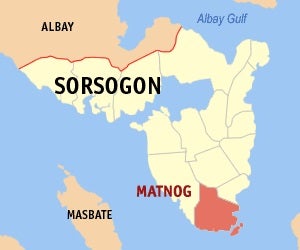 Dionebel Figueroa, Matnog municipal administrator, said the flood reached neck-deep in certain areas and some residents were waiting for rescue on the roofs of their submerged houses.

The darkness in some areas proved to be a challenge to responders, but rescue operations will not stop, Figueroa said.

“We need dump trumps because the water is deep and other vehicles cannot pass. Right now, we are prioritizing the ones on top of their houses. It is cold out there,” Figueroa told Inquirer in a phone interview.

He said they would also be using boats to help in the rescue by morning.

Rescued families were brought to the public auditorium and school building.

Figueroa said the families who were taking shelter at the parish church were also rescued and brought to higher ground.

According to him, road constructions and high tide contributed to the rise of flood water.

Figueroa said they had food packs enough for three days, but they also needed to provide help to 4,863 stranded passengers at the Matnog port.

“Our attention was divided (when the water started to rise) because we had to rescue our constituents first because they were in danger,” he said. “Our food stocks are now running low.”

Before floodwaters rose in the Poblacion area, 2,000 families in Matnog were already pre-emptively evacuated.

Meanwhile, in Sorsogon City, eight residents of Barangay Salvacion were rescued from the top of their houses amid the flooding. /cbb