A powerful winter storm that brought blizzard warnings Friday across the Upper Midwest was blamed for at least three fatal crashes while flash flooding from rains in the South swept away cars and forced dozens of water rescues.

In northern New England, a mix of snow, sleet, freezing rain and rain added up to make for dangerous driving Friday for post-holiday travelers.

Much of the Dakotas and part of Minnesota were under a blizzard warning after many areas got a foot (30 centimeters) of snow or more Thursday.

A collision between a small bus and an SUV in Minnesota killed a 47-year-old woman on the bus and injured nine others Thursday. A second person died in central Minnesota after being struck on a road by a pickup with a plow blade.

In North Dakota, a pickup truck driver was killed Thursday on a snow-covered highway when visibility was reduced by blowing snow from a plow, according to the state highway patrol.

Another storm dumped up to 12 inches (30 centimeters) of rain in Louisiana and Mississippi, sweeping away cars and forcing some residents to be rescued from their homes before the rains moved into Alabama, Georgia, Tennessee, and western North Carolina on Friday.

The National Weather Service posted flash flood watches and warnings for much of the South from Louisiana into southwest Virginia.

“We had an extreme flash flooding event,” said Glen Moore, the emergency management director in Forrest County, in southwestern Mississippi, which saw 9 inches (23 centimeters) fall over 12 hours through early Friday.

Authorities had to rescue residents from about 25 area homes in Forrest County, Moore said.

They rescued one man whose car was swept away after he went around a barricade on a flooded road, Moore said.

“He was able to make it outside of the car and latch onto a tree until we could get a boat to him,” Moore said. 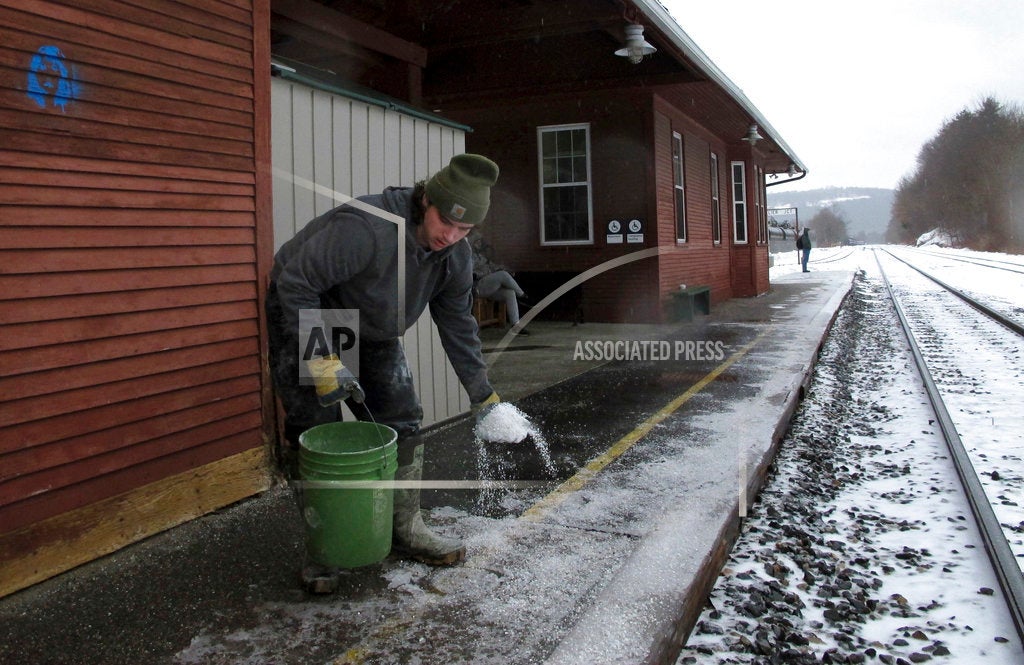 Mississippi officials warned that flood levels on some rivers in the state could be high, especially if the forecast for more rain through Tuesday holds up. Some levels could match a 2016 flood that led to a federal disaster declaration, said Greg Flynn, the state’s Emergency Management Agency spokesman.

He said survey teams were still assessing damage from flash flooding in southern Mississippi and it was too soon to say how many roads and bridges were damaged or how many homes were flooded.

There was one death in Tennessee where a woman fell into a rain rain-swollen creek near Chattanooga. Authorities who recovered the woman’s body Friday morning about three hours after she lost her footing said she had been camping in a cave with friends and they were trying to leave the area when she fell into the water.

Rescue workers in north Georgia used a ladder and ropes to get to a woman and baby stranded in a truck inundated by rising waters Friday. Dramatic video posted to Facebook showed crews working to reach the truck as water reached the vehicle’s windshield.

The storm system was blamed for a death in Louisiana earlier this week when a tree fell on a camper.
Forecasters said up to 5 inches (13 centimeters) of rain were possible in northern Alabama and central and north Georgia.

Water also flooded more than a dozen homes in St. Charles Parish, Louisiana, and a Trader Joe’s store near New Orleans lost power during the storm, prompting it to donate perishable grocery items to a food bank.

Some areas of the Midwest were seeing spring-like conditions.

Shorts and t-shirts replaced winter running gear Friday for several joggers in downtown Columbus, Ohio, where temperatures were in the 50s.

“It’s weird that there’s no snow,” said Evan Miller, who was about four miles into his run while wearing gray shorts and a short sleeve shirt.