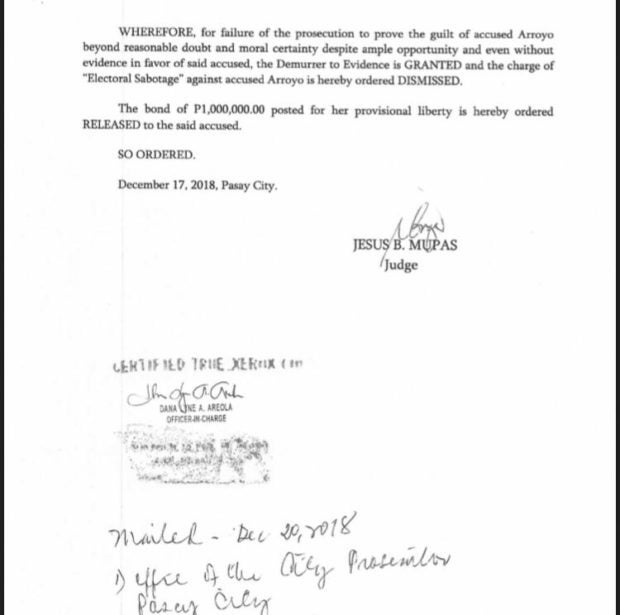 This is the last criminal case against the former President after she was cleared of plunder by the Sandiganbayan. Both the plunder cases related to the National Broadband Network (NBN) contract with Chinese firm ZTE and the alleged misuse of P366-million fund from the Philippine Charity Sweepstakes Office (PCSO) were dismissed via a demurrer to evidence.

A demurrer to evidence is in effect a motion to dismiss filed by the accused after the prosecution finished its presentation of evidence. It is anchored on the ground that the evidence presented is insufficient.

At the Ombudsman, the following plunder cases were dismissed: 1. complaint against her and her son Diosdado Ignacio “Dato” Arroyo over the P1-billion Libmanan-Cabusao Dam and Skybridge 1 and 2 projects; 2. P72 million in capital gains tax allegedly due but not collected in the sale of the old Iloilo Airport; 3. alleged misuse of P530-million Overseas Workers’ Welfare Administration and 4. fertilizer fund scam.

In the case before the Pasay Court, Arroyo has been accused of ordering two local officials of tampering the results of the 2007 elections in Maguindanao to reflect a victory sweep for the administration bets.

The prosecution claimed that a witness heard Arroyo issue a directive to then Maguindanao Governor Andal Ampatuan Sr. during a Palace dinner to work for “Team Unity,” which means all the administration senatorial candidates must win in the province.

During the trial, the prosecution has presented 11 witnesses to support its claim. Arroyo then filed a demurrer to evidence.

A demurrer to evidence is in effect a motion to dismiss the case filed by the accused after the prosecution finished its presentation of evidence. It is anchored on the ground that the evidence presented is insufficient.

In her demurrer to evidence, Arroyo said that of the 11 witnesses presented by the government, only Provincial Administrator Nori Unas mentioned her, but the testimony was uncorroborated by other witnesses or other evidence.

In dismissing the case against Arroyo, the Pasay court said that after examining the documentary and testimonial evidence that the prosecution has presented in the more or less seven years of trial, it “finds that the prosecution has failed to discharge its duty to prove the guilt of accused Arroyo beyond reasonable doubt, even in the absence of controverting evidence on the part of the accused.”

Even with the opportunity that was given to the prosecution, the court said it failed to present witnesses and documentary evidence to show that Arroyo conspired with her co-accused to rig the election results in Maguindanao.

“For failure of the prosecution to prove the guilt of accused Arroyo beyond reasonable doubt and moral certainty despite ample opportunity and even without evidence in favor of the accused, the demurrer to evidence is granted and the charge of electoral sabotage against accused Arroyo is hereby ordered dismissed,” the court said.

The court also returned to Arroyo the P1 million bailbond she posted for her temporary liberty. /muf /ee