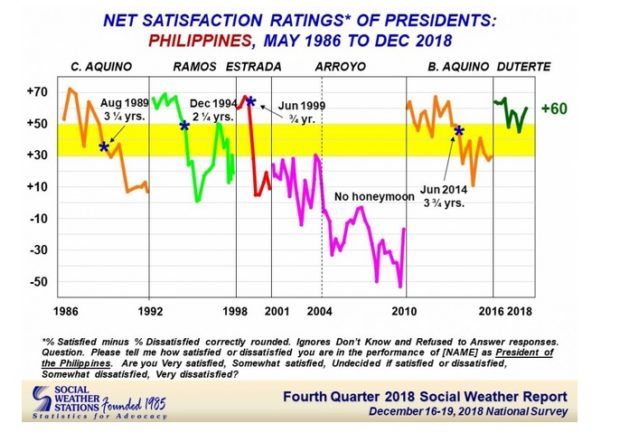 The latest survey, conducted from Dec. 16-19, found that 74 percent of adult Filipinos were satisfied with the performance of President Duterte, four points up from the 70 percent recorded last September.

Meanwhile,  11 percent were undecided and 14 percent were dissatisfied by the President’s performance in the latest survey.

The SWS said the 6-point increase in President Duterte’s net satisfaction rating could be attributed to increases of 22 points in Metro Manila, 13 points in the Visayas, and 3 points in Balance Luzon, combined with a 4-point decline in Mindanao.

Overall, there is a five-point drop in President Duterte’s 2018 annual average net satisfaction score of +54  from average net +59 in 2017, but still “very good,” according to SWS.

The chief executive’s net satisfaction rating also moved from “good” to “very good” in Balance Luzon, at +52 in December.

Meanwhile, it stayed “excellent” in Mindanao, at +73 in December, but it registered a 4-point drop from +77 in September.