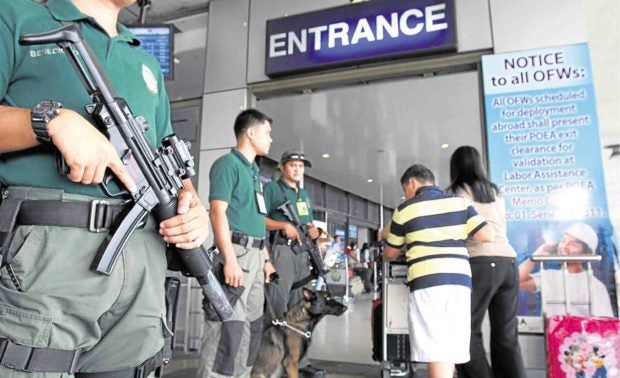 BELOW STANDARDS Despite increased police visibility, Ninoy Aquino International Airport still falls below the expectations of the US Department of Homeland Security. INQUIRER FILE PHOTO

The Department of Transportation (DOTr) on Thursday tried to contain the fallout from a travel advisory issued by the US Department of Homeland Security (DHS), which said security at Ninoy Aquino International Airport (Naia) was below international standards.

The DOTr said both the Manila International Airport Authority (MIAA) and the Office for Transportation Security were “giving utmost priority and attention” to strict security measures, which included not just beefed-up equipment but also changes in employee behavior.

In a Dec. 26 advisory, the DHS said: “Aviation security at Ninoy Aquino International Airport (MNL), which serves as a last-point-of-departure airport for flights to the United States, does not maintain and carry out effective security consistent with the security standards established by the International Civil Aviation Organization.”

It said Naia fell below international security standards based on assessments made by a team of “security experts” from the US Transportation Security Administration (TSA).

The DHS directed airlines flying between the United States and Manila to notify passengers in writing of Naia’s inadequate security.

All US airports that handle scheduled service to Naia were also told to display the warning prominently.

In a statement, the DOTr said it was taking action in response to the security assessment.

The DOTr said it was procuring such equipment, which would likely be installed after March next year.

No cause for alarm

In a press conference on Thursday, MIAA general manager Ed Monreal said “there is no cause for alarm” over the DHS advisory.

He said there was nothing in the 16 TSA recommendations “that cannot be addressed” and that seven have been complied with.

US Ambassador Sung Kim said in a statement that the US Department of State had approved a $5-million assistance to enhance airport security, including “critical training and technology improvements.”

Kim said TSA had recommended what technology to use, the streamlining of screening operations and the modernization of Naia’s security infrastructure. It also provided aviation security “advisers,” he said.

The new hiring directive came after the TSA advised airport authorities to revise their background investigation procedures for new employees, such as requiring neighborhood and National Intelligence Coordinating Agency checks on those involved in airport security.

All airport access pass holders would need new clearances from the National Bureau of Investigation, the DOTr added.

The TSA also recommended a change in the “security culture” among longtime Naia personnel for the consistent implementation and observance of strict security procedures, it said.

In this connection, the agency said employees had been retrained.