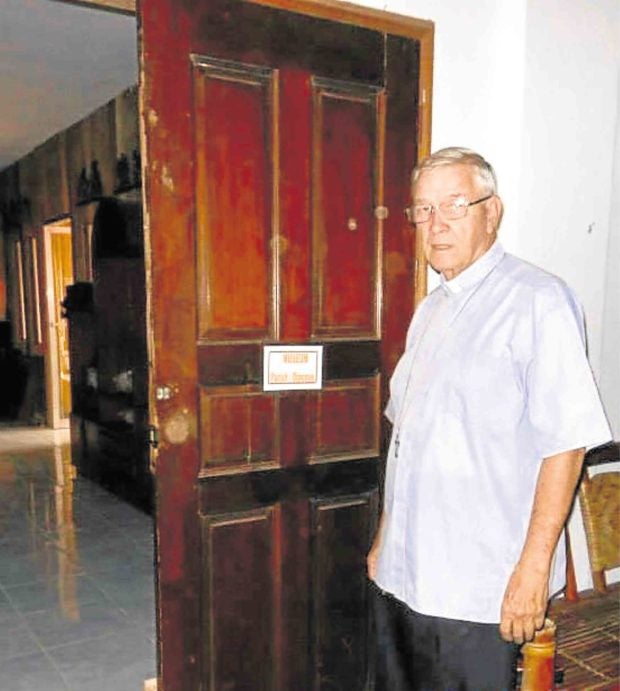 ACCUSED American priest Kenneth Bernard Pius Hendricks inside Our Lady of the Holy Rosary Cathedral in Naval, Biliran, where he was arrested on Dec. 5. CONTRIBUTED PHOTO

NAVAL, BILIRAN—After years of being sexually abused by an American Roman Catholic priest, a 12-year-old boy is leading the fight against pedophilia in a remote village here where his older brother and many of their friends are also victims.

Police officials here said JVA (the boy’s alias in the criminal complaint) convinced his 22-year-old brother, known in the same complaint as CV, and several other former altar boys who are now of legal age to come out and charge the 77-year-old priest, Kenneth Bernard Pius Hendricks, of sexually abusing them for many years.

“The courage and bravery of this boy is extraordinary. He is the reason why we have this case,” said SPO3 Venus Abrigo, chief of the Women and Children Protection (WCP) desk of the Naval Police Station.

The boy, who is now in Grade 6 here, is said to idolize Coco Martin’s character in the popular television series “Ang Probinsyano.”

Police say the minor is doing his best to break free from years of shame, guilt and trauma.

“This boy brought down his family’s wall of silence regarding his abuse and defied his church,” added Abrigo, who claimed that JVA and CV had stopped attending St. Isidore the Worker Chapel at Talustosan village, where they assisted Hendricks for many years as altar boys.

The Catholic Bishops’ Conference of the Philippines, which has jurisdiction over Hendricks, has not commented on the scandal since his arrest here on Dec. 5 by Philippine and American law enforcement officers.

Instead of ministering to his parishioners during the holidays, Hendricks spent Christmas in an immigration jail at Bicutan as Philippine and American officials wrangled over jurisdiction.

The diocese of Naval, which has sheltered Hendricks for 37 years, has imposed a news blackout on the case, deciding not to comment to the media while conducting its own investigation.

A potential David vs Goliath kind of legal fight could happen, pitting the abuse victims and their lawyers against the Catholic Church, one of the most powerful institutions in the country, if lawsuits are allowed to proceed against Hendricks, an American citizen who still maintains an address in Cincinnati, Ohio.

The identity and whereabouts of JVA and his brother are being kept under wraps by the local police and agents of the US Department of Homeland Security as both governments prepare a case of criminal child sex abuse against the former Franciscan missionary.

Hendricks was the only foreign priest working in the diocese of Naval.

JVA, who was baptized by Hendricks as a 2-month-old child in 2006, told investigators that Hendricks assaulted him numerous times since he was 7 years old inside the priest’s quarters at the Talustosan chapel, where Hendricks was the priest in charge.

Talustosan is a village at the foot of the Biliran mountains that can only be reached by “habal-habal” (motorbike).

“Malain. Maraut. (It’s strange. It’s bad),” JVA told police investigators in the local dialect when asked how he felt during the times when he was being molested by Hendricks.

“I pity these boys. They will be scarred and traumatized for life,” said a Manila-based official of ChildFund, a nonprofit children’s advocacy group.

“These boys looked up to this priest. And then they were abused. That’s the worst form of betrayal,” the official said.

In the affidavit he filed on Nov. 6, JVA said he was alarmed when his brother CV got sick with a sexually transmitted disease in 2015 but the priest did not bother to bring CV to a hospital.

JVA said he decided to come forward after the American priest assaulted him again on Oct. 31, 2018.

Police said an American citizen named “Jeff,” who is a boyfriend of the boys’ sister, persuaded the brothers and their mother to press charges against Hendricks.

Hendricks, who reportedly travels back to the United States every year to solicit funds from his old archdiocese at Cincinnati, allegedly bribed the brothers and their parents by building them a house, paying for the boys’ education and gifting CV with a motorcycle.

JVA’s complaint, together with the affidavits of CV and their 50-year-old mother, became the basis for the warrant of arrest for Hendricks signed on Nov. 30 by Magistrate Judge Stephanie K. Bowman, of the Southern District Court of Ohio.

Hendricks was charged with a federal crime involving a US citizen engaging in illicit sex with a minor in a foreign country.

While US Attorney Benjamin Glassman of the Southern District of Ohio said last week that his office would prefer that Hendricks be tried in the Philippines first, the case had slowed down in Naval on procedural matters.

In a move seen to defer to the US justice system, Judge Constantino F. Esber of the Regional Trial Court’s Branch 11 in Naval has yet to schedule the case for trial, although it was raffled to his court on Nov. 9 yet.