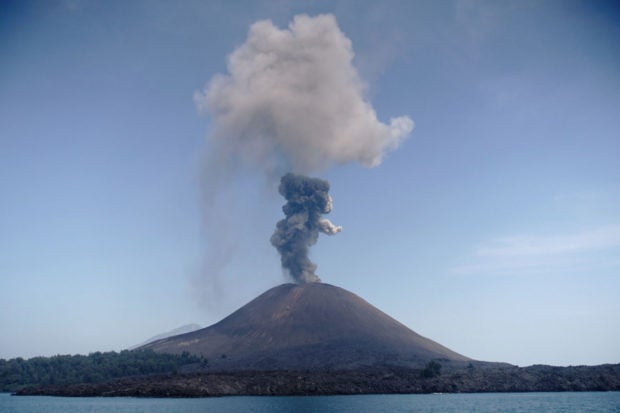 A plume of ash rises from Mount Anak Krakatau on July 18, as seen from Rakata Island in South Lampung. (AFP/Ferdi Awed)

JAKARTA — The alert level for Mount Anak Krakatau in the Sunda Strait was raised early Thursday amid increased volcanic activity.

“Residents and tourists are prohibited from approaching the crater,” the Volcanology and Geological Hazard Mitigation Center (PVMBG) announced in a statement.

The agency said its monitoring posts had detected increased volcanic activity, as seen in small eruptions followed by ash fall that reached areas in nearby Cilegon and Serang, Banten.

Previously, the National Disaster Mitigation Agency (BNPB) warned the public to stay 500 meters to 1 kilometer from the coast amid fears of another tsunami. A number of beaches in the province were struck by the Sunda Strait tsunami on Saturday night. As of Wednesday, the confirmed tsunami death toll reached 429.