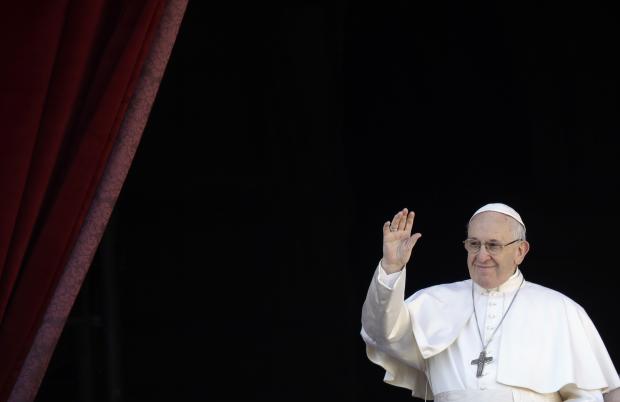 Pope Francis waves as he arrives to deliver the Urbi et Orbi (Latin for “to the city and to the world” ) Christmas Day blessing from the main balcony of St. Peter’s Basilica at the Vatican, Tuesday, Dec. 25, 2018. (Photo by ALESSANDRA TARANTINO / AP)

VATICAN CITY — Pope Francis offered a Christmas wish for fraternity among people of different nations, cultures, faiths, races or ideas, describing the world’s differences as a richness, not a danger, and championing the rights of religious minorities.

His plea Tuesday for stronger bonds among peoples came as nationalism and a suspicion of migrants are gaining traction across much of the globe.

The long war in Syria, famine amid warfare in Yemen, social strife in Venezuela and Nicaragua, conflicts in Ukraine and tensions on the Korean Peninsula were among the pope’s concerns in his Christmas Day message, which he read from the central balcony of St. Peter’s Basilica.

Addressing some 50,000 tourists, pilgrims and Romans who flocked to St. Peter’s Square on a mild, sunny day, Francis said the universal message of Christmas is that “God is a good Father and we are all brothers and sisters.”

“This truth is the basis of the Christian vision of humanity,” Francis said in the traditional papal “Urbi et Orbi” (“to the city and the world”) message. Without fraternity, he said, “even our best plans and projects risk being soulless and empty.” He called for that spirit among individuals of “every nation and culture” as well as among people “with different ideas, yet capable of respecting and listening to one another.”

“Our differences, then, are not a detriment or a danger; they are a source of richness,” Francis said.

Francis prayed that all minorities have their right to religious freedom respected, noting that some Christians were celebrating Christmas “in difficult, if not hostile, situations.”

Communist China is witnessing a systematic suppression of religion, including some restrictions on Christmas celebrations this year. The government’s suppression campaign includes re-education camps for Uighur Muslims and a crackdown on Christian churches.

Without specifying religions or countries, Francis prayed for “all those people who experience ideological, cultural and economic forms of colonization and see their freedom and identity compromised.”

Francis urged the international community to find a political solution that “can put aside divisions and partisan interests” and end the war in Syria. He said he hoped that an internationally-brokered truce for Yemen would bring relief to that country’s people, especially children, “exhausted by war and famine.”

He encouraged dialogue among Israelis and Palestinians to end conflict “that for over 70 years has rent the land chosen by the Lord to show his face of love.”

In Africa, Francis recalled the millions fleeing warfare or in need of food, and prayed for “a new dawn of fraternity to arise over the entire continent.”

Francis urged Venezuelans to “work fraternally for the country’s development and to aid the most vulnerable.” Millions of Venezuelans are fleeing their country’s economic and humanitarian crisis in what has become the largest exodus in modern Latin American history, according to the United Nations.