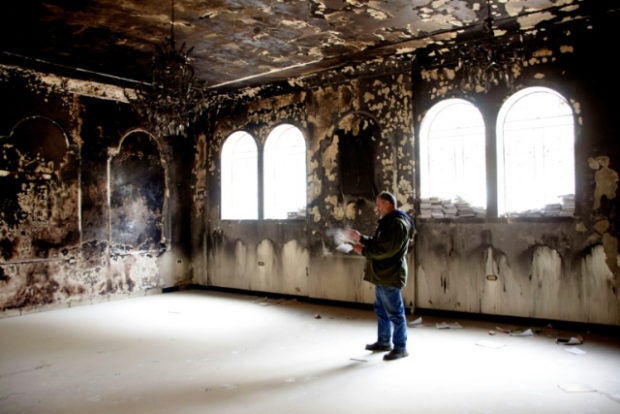 With Christmas approaching, Nabil al-Aash dusts off religious books as he attempts to tidy up the war-scarred Saint George Church in the town of Arbin, northeast of the Syrian capital Damascus.

Retaken in the spring by forces loyal to President Bashar al-Assad during a brutal offensive to capture the rebel stronghold of Eastern Ghouta, Arbin is anything but festive.

Rubble from razed buildings spills out into deserted streets lined with burned-out cars and twisted scraps of metal. The town looks more apocalyptic than merry.

Arbin’s only church, Saint George’s flame-scorched walls and empty nave are a testament to the seven-year conflict that has left more than 360,000 people dead and displaced millions.

“There’s no celebration here. Christian homes are destroyed and their church is destroyed,” says Aash.

The restoration of the Greek Orthodox church, built in 1873, “will take a lot of time, money and effort,” he adds.

“There’s not a single icon left — all of them were either burned or stolen,” said the 55-year-old, approaching the altar.

Aash fled Arbin in 2012 as fighting engulfed the town, plagued afterwards for years by violence and a crippling siege imposed by Damascus.

But after regime forces retook the area, he decided to return home.

“I grew up in this church, I spent all of my Christmases here… it was once overflowing with joy,” he remembers.

“I almost collapsed when I saw it.”

For him, the festive spirit “won’t return until the residents and parishioners do.”

After a blistering offensive backed by Russian air power, government forces in April retook Eastern Ghouta, a key rebel foothold at the gates of Damascus.

The military push and years of shelling flattened large swathes of the area and forced most of its pre-war population to flee.

Before the war, Arbin was home to some 3,000 Christian residents, according to Mayor Khalil Tohme.

But despite the return of relative calm to the capital and its surroundings, Arbin residents are still hesitant to come back.

“We are only five Christians who regularly visit the town, the others go from time to time… most of their homes are destroyed,” says Aash.

A few dozen meters away from the church, Joseph Hakimeh directs a worker on a ladder as he puts the final touches to a freshly painted wall of a restored home.

The contractor is getting ready to hand the keys back to the owner, and is working on three other homes in addition to his own.

“We’re preparing to return as soon as services and infrastructure are ready, but that needs time,” he says.

Sitting on a can of paint, the 39-year-old yearns for the way things once were.

“I hope that next year everything will return to the way it was before — Christmas trees, decorations, carols and prayers,” he says.

The mood is gloomy is Arbin, but just a few kilometers away, bright colored lights illuminate the streets of Damascus.

A giant tree decorates Abbasiyyin Square, long avoided due to its proximity to the frontline with the former rebel stronghold.

But not everyone is in the Christmas spirit.

Since Riad Rajiha’s family arrived to the area after fleeing Arbin in 2012, they have not had the heart to celebrate.

“We left our Christmas tree behind, so we missed out on decorating,” says Rajiha, his eyes brimming with tears.

“What’s the meaning of decorating a tree in a house that’s not yours?”

Leafing through an old photo album, he revisits pictures of the Saint George Church in all its former glory.

Large chandeliers hang from its high ceilings, its wooden pews packed with parishioners.

“Our roots are there and our memories are there,” says the 66-year-old, who dreams of celebrating the holiday in Arbin with his grandchildren.

“I was born in Arbin, I lived in Arbin, and I hope to be die and be buried there.” CC