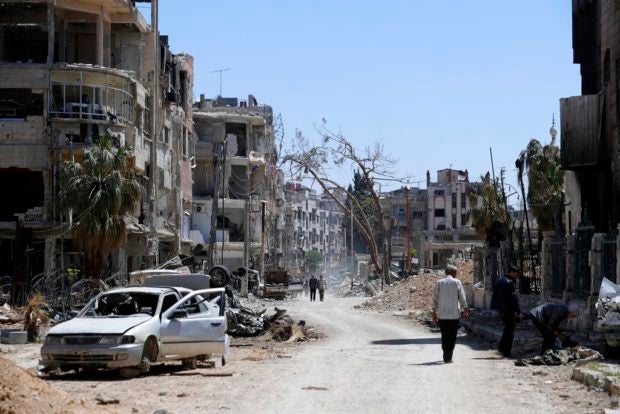 Syrians walk through destruction in the town of Douma, the site of a suspected chemical weapons attack, near Damascus, Syria, April 16, 2018. (Photo by HASSAN AMMAR / AP)

BEIRUT — President Donald Trump’s decision to withdraw troops from Syria has rattled Washington’s Kurdish allies, who are its most reliable partner in Syria and among the most effective ground forces battling the Islamic State group.

Kurds in northern Syria said commanders and fighters met into the night, discussing their response to Wednesday’s surprise announcement.

READ: Trump declares victory over IS in Syria, orders US troops home

Arin Sheikmos, a Kurdish journalist and commentator, says “we have every right to be afraid.”

The move is widely seen as an abandonment of a loyal ally, one that could prompt Turkey to launch a fresh offensive against the Kurds or drive the Kurds into a new alliance with Syrian President Bashar Assad, Iran and Russia.

A Syrian member of parliament, Peter Marjana, said Thursday that a U.S. pullout would be a “recognition that Syria has won.” /atm