In a statement, President Fr. Jose Ramon Villarin SJ said that after “thorough investigation” and meeting with both parties concerned, the administration of the university decided to dismiss the bully student.

“The decision of the administration is to impose the penalty of dismissal on the student caught bullying another student in the comfort room of the school,” Villarin said Sunday.

“This means that he is no longer allowed to come back to the Ateneo,” he added.

According to Villarin, he already talked to the families concerned regarding the decision and offered support for them to overcome the incident.

He also said further investigation is already underway “as there are other matters involved in the incident.”

Other videos that subsequently surfaced online showed the same student forcing other students to admit their idiocy and kiss his shoes.

Senators and even a Palace official immediately expressed alarm over the incident.

“The Ateneo is very clear on its stand against bullying. There are already policies and processes codified in the Student Handbook, all in accord with existing legislation, but we still need to ensure that these policies and processes as well as the values they promote are internalized by all members of the community,” Villarin said.

With this, Villarin said he has formed a Task Force to conduct a “comprehensive study” on the current situation of Ateneo following the incident.

The Task Force, he said, aims to ensure the safety of its students against bullying incidents that may happen inside the campus.

“Such an environment shall prevent a culture of silence from harming out students and encourage everyone to speak up against bullying and other forms of misconduct without fear of retaliation or censure,” he said.

“Such environment will empower our students to become the Ateneans we all desire them to be for others,” he added.

In an earlier statement, Ateneo has vowed to expel its student found guilty of grave misconduct.

According to Villarin, the “hallmark of Ateneo education is teaching our young men to respect the dignity of others, to practice the value of communication and dialogue, and to cultivate the compassion and discipline we all need to build mutual respect and peace in the community,”

READ: Ateneo vows to kick out student if found guilty of bullying

Villarin further acknowledged the effect of the bullying incident not only on the parties involved but on the general public as well.

He then appealed for people to help stop “fanning the flames of hatred and violence” by supporting “our children and one another heal.”

“We have the power to amplify the pain by simply fanning the flames of hatred and violence, by fighting fire with fire. Our young ones cannot escape all this unscathed. They are the ones most wounded by our violent words and example,” he said.

“We can summon the courage to stop fighting one another. We have that power too. We can begin by refusing to add fuel to the fire and helping our children and one another heal,” he added. /kga 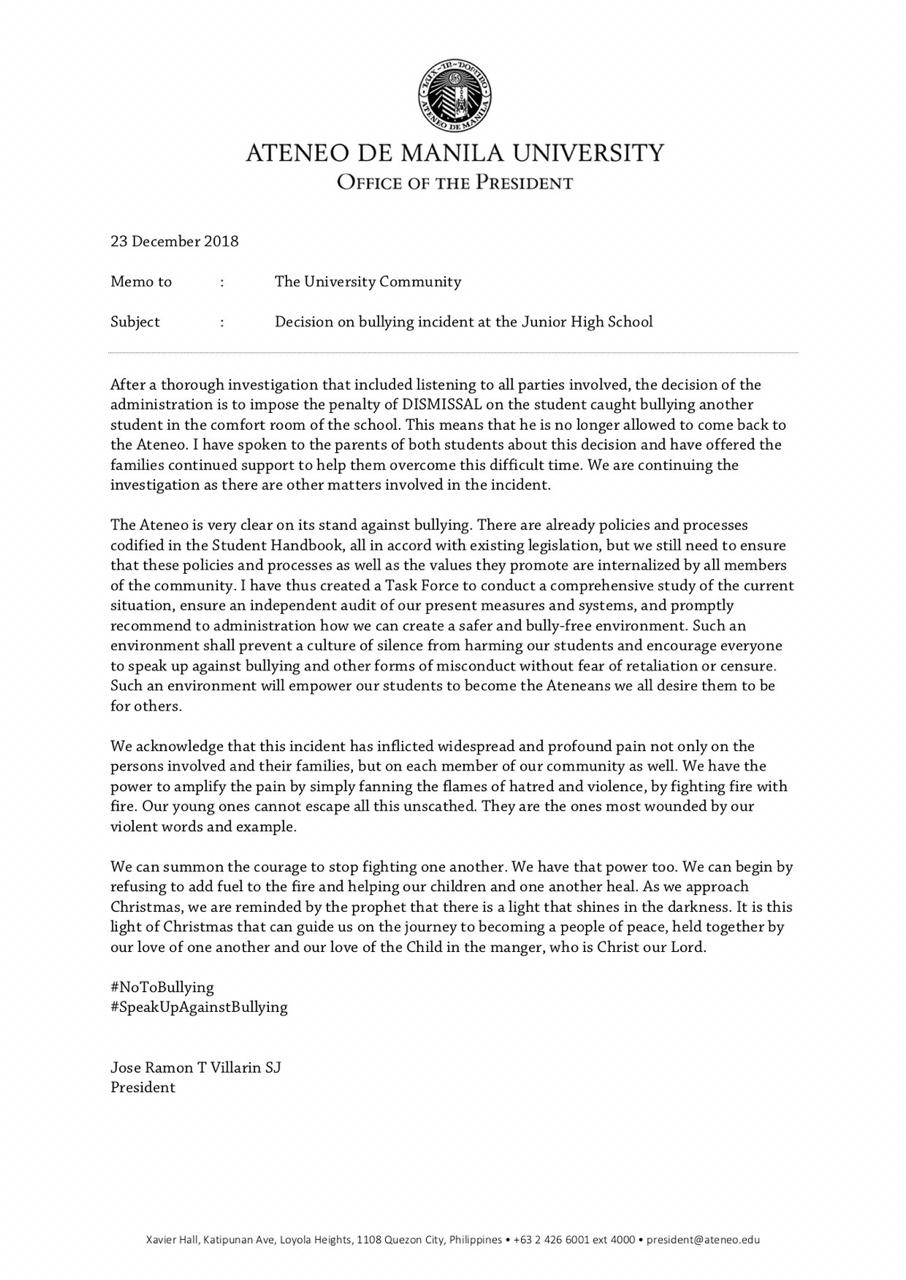