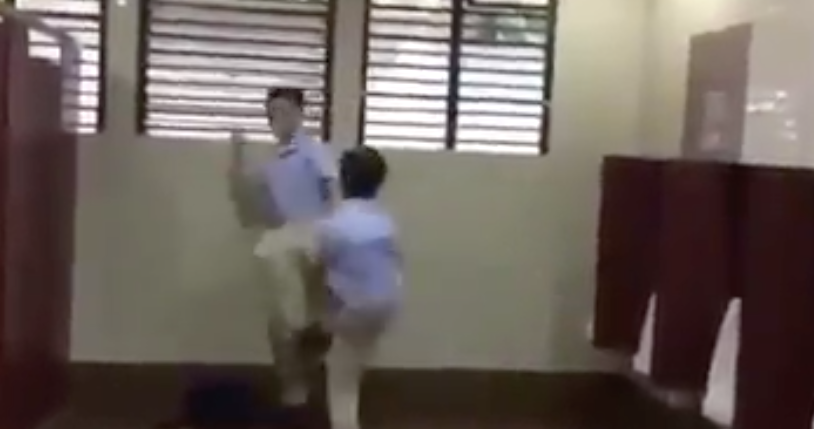 Ateneo de Manila University said it would not hesitate to expel one of its junior high school students for alleged bullying amid public outrage generated by viral videos showing the teen’s aggressive actions that also triggered disputes over how to handle such behavior.

In three separate videos that began to spread on the internet on Wednesday, the teenage taekwondo gold medalist is seen kicking and punching a fellow student inside the school toilet, beating a second student in a fight and forcing a third to kneel in submission and touch one of his shoes.

Senators and the spokesperson for President Rodrigo Duterte on Friday expressed alarm and urged school authorities to investigate the incidents and impose the appropriate punishment on the erring student.

An officer of the Philippine Taekwondo Association also condemned bullying by any martial arts practitioner, saying the group teaches respect for others.

“The school is not silent on its stand on violence and it will not hesitate to impose the penalty of dismissal or even expulsion in cases of grave misconduct,” Ateneo president Fr. Jose Ramon Villarin, SJ, said in a statement on Thursday.

“A hallmark of Ateneo education is teaching our young men to respect the dignity of others, to practice the value of communication and dialogue, and to cultivate the compassion and discipline we all need to build mutual respect and peace in the community,” Villarin added.

Ateneo high school principal Jose Antonio Salvador earlier said in a separate statement that while the student’s actions “constitute a serious violation of disciplinary misconduct,” he expressed concern over the widespread sharing of the videos on social media.

“Not only have the privacy rights of these minors been breached but it has also provoked some reactions that do little to help the school in dealing appropriately with the incident,” Salvador said.

A child rights advocate said peer violence in the form of bullying should be treated seriously, but the privacy of all children involved should have been protected.

A form of cyberbullying

Sharing the video of the bullying and calling for harsh punishments for the child is a form of cyberbullying, according to Wilma Banaga, child protection advisor for Save the Children Philippines.

Foreign Secretary Teodoro Locsin Jr., an outspoken social media commenter, disagreed with a soft-handed approach to bullies, saying the parents of the victim “should take the law in their own hands.”

“The only way to teach a bully is to beat him senseless. Psychiatric help? He should get traction,” Locsin said in one Twitter post.

In another, he said: “The bullied kid may be haunted by this abuse. The abuser should be beaten senseless. Trust me, this works—sometimes permanently.”

“Jesus, what’s the world coming to when bullies are babied instead of beaten,” he added.

Sen. Nancy Binay said people should not become bullies themselves in the process of dealing with bullying because “it only worsens the culture of hate.”

Binay said social media has become an “instrument of hatred” and a “place of torment.”

“Shaming the bully is not the solution. Let’s strive to heal even the tormentors and work for a bully-free society,” she said.

Sen. Francis Pangilinan said the punishment to the aggressor must be “child appropriate and consistent” with the antibullying law.

The law states that if bullying occurs, the school authorities should notify law enforcers if they believe criminal charges may be pursued. They should also take appropriate disciplinary administrative actions on their own and notify the guardians or parents of the bully and the victim.

Supt. Kimberly Molitas, deputy spokesperson for the Philippine National Police, said the PNP was waiting for the Ateneo school administrators to inform authorities to determine how law enforcers could help.

“We have to remember these are children and we want to give the correct intervention so this will not happen again,” Molitas told reporters.

Sen. Sonny Angara, one of the authors of the law, reminded school administrators that under the Family Code, they were responsible for children under their custody.

“Kids and parents have a right to demand that schools provide a safer and nurturing learning environment,” he said.

He said the student’s parents should also take responsibility, adding that they most likely “either tolerate the (boy’s) attitude or simply failed to inculcate correct values and behavior” on him.

The teen’s parents could not be reached for comment.

A former taekwondo student himself, Ejercito said martial artists were taught to use their skills only for self-defense.

Danilo Mojica, vice president of Philippine Taekwondo Association, condemned any form of harassment, bullying and violent acts by its practitioners.

“Our association reiterates its objective to teach all taekwondo practitioners self-respect and respect for others,” Mojica said in a statement on Friday.

Presidential spokesperson Salvador Panelo said he was “bothered by what (he) saw” on the videos and urged Ateneo to “do something about it.”

Justice Secretary Menardo Guevarra advised the parents of the alleged bully’s victims “to address the situation internally, within the parameters of school policy and regulations.”

“We are dealing with growing up and adolescent children lacking in maturity and discernment here. We need to exercise circumspection,” he said.

On his Facebook account, Assistant Interior Secretary RJ Echiverri said his own son was “one of the victims” of the alleged bully.