Ex- Air Force chief: ‘May we be on the right side of history’ 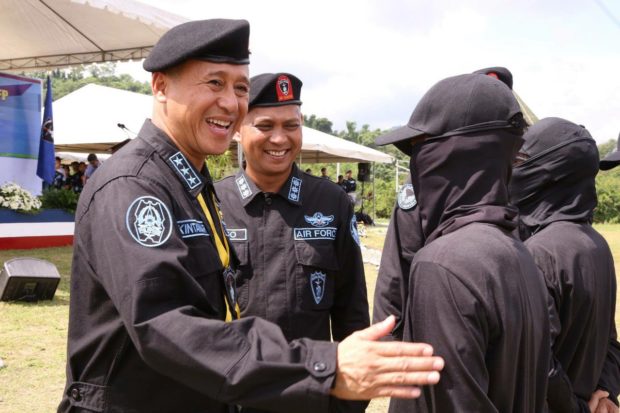 MANILA, Philippines — Lt. Gen. Galileo Gerard Kintanar Jr. stepped down from his post as commanding general of the Philippine Air Force on Friday. But it seems he would only reveal his side of the story on the speculations surrounding his sudden replacement only when has has retired from service 13 months from now.

“As I relinquish my post, and finally retire on 14 January 2020, or 13 months from now, may we be on the right side of history, or may history be kinder to all of us,” he said in his outgoing speech at the change of command ceremony at Villamor Air Base in Pasay.

“Temporary our positions may be, and fleeting as we are, we servant leaders simply aspire to make this country of ours a better and more peaceful place to live in,” he added.

President Rodrigo Duterte signed the appointment of Lt. Gen. Rozzano Briguez as the new Air Force chief on Dec. 5. The military was later quick to explain that there was “nothing irregular” with the sudden change of leadership.

There were talks on social media that Kintanar was relieved of his position as Air Force chief over questions about the helicopter acquisition projects, which was likened to the case of then Navy chief Vice Adm. Ronald Joseph Mercado.

Mercado was relieved four months ahead of his retirement date last year over issues in the choice of combat system management (CMS) for two frigates of the Philippine Navy.

At that time, he questioned the CMS choice of shipbuilder Hyundai Heavy Industries, which was not the original preference of the Navy’s technical working group.

The case of Kintanar was not similar to Mercado’s, the AFP insisted, saying: “He was replaced not for any issues of corruption or anomalies as insinuated by some posts in social media. This recent change in the PAF leadership is part of the ongoing movement in the top posts in the AFP hierarchy.”

At the change of command ceremony, the President appointed Kintanar as administrator of Philippine Coconut Authority.

But it appears Kintanar will hold that post while still in the military because he said that he would retire in 13 months, when he reaches the mandatory retirement age of 56.

In his speech, Kintanar admitted that the past month had not been easy for him, but he did not elaborate why.

“The past month has been particularly difficult for me,” he said. “Well, God is firmly in control. Thank you, Lord Jesus, as my shield, my armor, my redeemer…Through God’s grace, prayers have been answered; I have emerged a stronger and more enlightened man.”

The former Air Force chief refused to comment on questions about his sudden replacement when asked by reporters after the turnover ceremony.

“I will retire on 14 January 2020 and maybe it’s best to tell my story that time, less the emotions on what really transpired,” he said. “Nonetheless, things happen for a reason and I’m happy to have served the Air Force.” /atm