Enrile relates he was once bullied: ‘I hate bullying’ 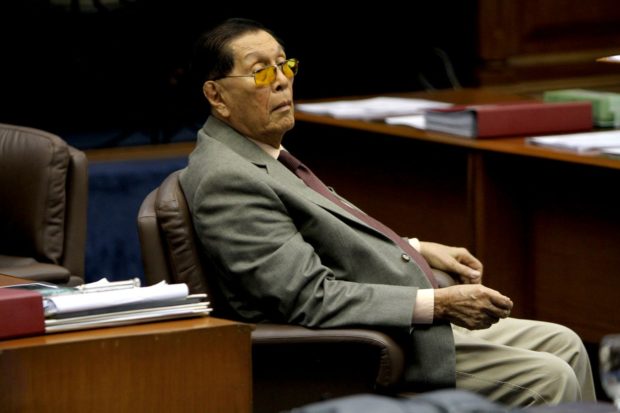 “I hate bullying,” former Senate President Juan Ponce Enrile said in a Facebook post he shared late Friday night as he revealed that he, too, had once been bullied.

“I was also a victim of it when I was a second year student in a private high school where I was enrolled under a scholarship grant in Aparri, Cagayan,” Enrile, who is again running for senator in the 2019 elections, said.

Enrile posted the message in the wake of bullying videos involving students at the Ateneo Junior High School that had gone viral on social media.

Though he made no reference to the Ateneo bullying case, he had this message: “Parents should go out of their way to inculcate to their children the virtue of kindness to others, especially those who are deprived and powerless. To the young people: learn to exercise charity to your neighbors, especially the weak and needy. Do not use your gift from God — your keen mind, your physical strength, your affluence, your power, or whatever to take advantage or dominate others.”

“As the poet said, without surrender, be at peace with all persons,” he added. “Merry Christmas and may you all have a Happy New Year. Gusto ko happy ka!”

Here is how Enrile related his bullying experience:

“One morning, when I was on my way to my class room on the second floor of our school building, four older male students rushed out of a door behind me and attacked me with their knives. I was completely taken by surprise and surrounded. I dropped my books and parried their assaults with my bare hands.

“To save my life, I managed to jump out of a window. Upon landing on the ground below, blood was oozing from the right side of my neck, my left arm had a long and ugly cut, my belly was ripped, and my shirt and pants were red with blood. I rushed to the municipal building nearby and Dr. Alfredo Gorospe — the municipal doctor — sutured my wounds without anesthesia.

“I filed a case against my attackers but the case was later dismissed. I had no lawyer. My attackers had all the lawyers in town. Worse, I was expelled from school. Two of my attackers were kids of some members of the Board of Trustees of the school.

“And this incident defined the course of my life.

“I wanted to be an engineer because math was easy for me, but I shifted to law because of the injustice I had suffered.”