Mexico appears willing but unready to hold US refugees 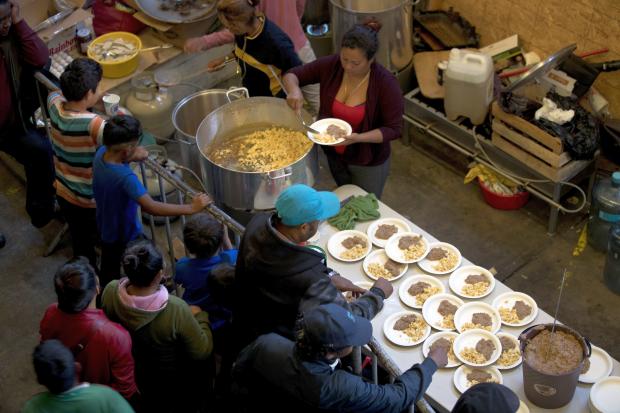 Breakfast of rice, beans and tortilla chips is prepared for Honduran migrants inside an empty warehouse that opened its doors to migrants in downtown Tijuana, Mexico, Tuesday, Dec. 18, 2018. The owner opened the warehouse for two months, after it had been empty for years, so some migrants don’t sleep on the sidewalks. (Photo by MOISES CASTILLO / AP)

TIJUANA, Mexico — Mexico’s willingness to accept U.S. asylum seekers while their applications are processed appears to be yet another sign of the blooming honeymoon between leftist President Andres Manuel Lopez Obrador and President Donald Trump, though it is also causing concern among officials in Mexican border cities already struggling to deal with thousands of Central American migrants.

Mexico could have simply refused, as it historically has, to accept the return of non-Mexicans. But this week’s announcement of $10.6 billion in U.S. development aid and the personal relationship between the two presidents appeared to smooth the path.

It is the same relationship that helped resolve stalled negotiations on Mexico’s free trade agreement with the United States and Canada.

“Right now it’s a honeymoon, in part because even though one is on the left and the other is more to the right, they have things in common — protectionism, the anti-establishment thing, each one’s nationalism,” said Jose Antonio Crespo, a political analyst at Mexico’s Center for Economic Research and Training.

Crespo noted Trump was getting along better with Lopez Obrador than with his conservative predecessor, Enrique Pena Nieto. “Up to now it’s been a honeymoon, who knows how long it will last.”

Mexico, meanwhile, is struggling to say how it will house and protect what could become tens of thousands of Central American migrants who might wind up in its cities along the border with the United States. It is clearly not ready to shelter so many.

Tonatituh Guillen, the head Mexico’s immigration agency, said, “In the short term, the National Immigration Institute does not have the organizational capacity to operate this kind of program … the current legislation also doesn’t help us.”

Mexico is already hosting thousands of Central Americans who arrived as part of a migrant caravan in November. Those migrants were dismayed by Thursday’s announcement.

“This is bad, because every country has its sovereignty, it doesn’t have to depend on another country,” said Luis Miguel Conde, a Guatemalan who traveled to Tijuana with his wife and two children to request asylum in the U.S. “When you apply for asylum in Mexico, they don’t send you to Guatemala to wait. You wait for your application within the country’s territory.”

Tijuana is currently the most popular crossing point for asylum seekers waiting to submit claims in the United States, but the border city is already weary of housing over 7,000 migrants who arrived in the caravan in November.

The city’s police staged a raid before dawn Thursday to clear dozens of migrants who had resisted moving to a shelter farther from the border and camped out on a downtown street a few blocks from the border. Riot police loaded about 120 people onto buses to take them to the Barretal shelter, located about 14 miles (22 kilometers) from the San Ysidro border crossing. Officers arrested two dozen who refused to relocate.

“We did have to detain 24 people who refused to leave the street, and we found some who were doing illegal drugs,” Police Chief Marco Sotomayor said.

Cesar Palencia, director of migrant affairs for the city government, reacted with surprise to Thursday’s announcement by the federal government on housing asylum seekers.

“How would it be done? For how long? How many people? We don’t know what the strategy or the plan is, nor have any studies been done,” Palencia told The Associated Press. “We respect the federal government’s decision, but we would ask that it be accompanied by personnel, funding and a strategy.”

The assistant legal counsel for Mexico’s foreign relations department, Alejandro Celorio, said that there will not be any detention centers for migrants. “They will not be detained,” he said.

But Celorio did not say whether shelters, like the former Barretal concert venue in Tijuana, would be built, expanded or made more permanent — and whose money would be used to pay for such shelters.

The only strategy Mexico’s federal government has launched so far is a TV and radio “campaign against xenophobia” announced Thursday to combat suspicion and dislike of migrants.

“Migrants are not a threat, this is not an invasion,” said Alexandra Haas, the head of Mexico’s anti-discrimination agency.

The most outraged reaction came from U.S. immigration activists, but reaction on the Mexican side was muted, in part because Lopez Obrador’s administration was apparently successful in depicting the decision as a humanitarian measure to protect migrants.

“There is a segment of Mexicans who are better off and don’t feel threatened by migrants who can say this is good, we have to be humanitarian, show solidarity,” said Crespo, the analyst. “But for those (Mexicans) who are looking for a job, they perhaps won’t like this.”

All in all, it will be hard for opponents to accuse a die-hard nationalist like Lopez Obrador of being too pro-American.

“Who can stand up in congress and say: ’You’re selling the country out,’” said Federico Estevez, a political science professor at the Autonomous Technological Institute of Mexico. “He (Lopez Obrador) may absorb a cost, but it’s relatively small price to get your neck out of the noose on the immigration issue.”

“I don’t think you can find on the Mexican side much of a coherent stance against these concessions,” Estevez added. “I don’t think you have a very strong constituency on this side” in favor of the Central American migrants. /atm