Asylum seekers stake claims on patch of US soil at border 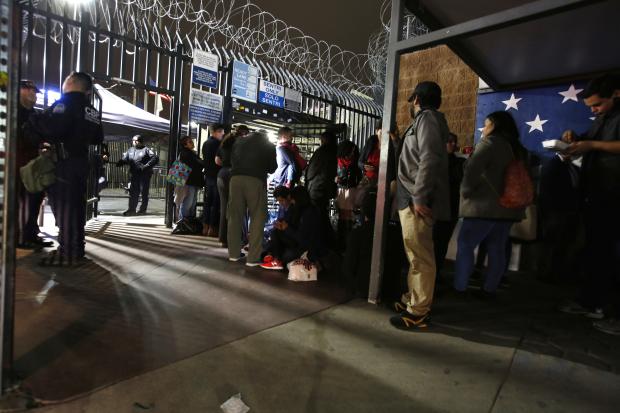 TIJUANA, Mexico — Several asylum seekers, joined by two members of the U.S. Congress, waited on a small patch of U.S. soil for hours demanding that their claims be processed immediately, challenging a U.S. policy to make people wait in Mexico if there are capacity constraints.

The 21 Honduran asylum seekers camped on U.S. soil at San Diego’s Otay Mesa port of entry, with the official border separating the U.S. and Mexico to the south and U.S. inspection booths to the north, said Nicole Ramos, an attorney at Al Otro Lado, a legal services organization working on behalf of the migrants.

But a family of five and one man continued to wait on the small piece of U.S. soil, backed by the presence of U.S. Reps. Nanette Barragan and Jimmy Gomez, both California Democrats.

“Children are sick, they’re crying, they’ve had to use the bathroom,” said Ramos. “We’ve had to get blankets and food for them.”

CBP did not comment on the status of the 21 asylum seekers but officials said claims are processed as quickly as possible.

The impasse highlights a U.S. practice to limit entry for asylum seekers at official crossings when they are at full capacity, which it calls “metering” or “queue management.”

Authorities emphatically deny they are turning away asylum seekers – prohibited under U.S. and international law – and say they are simply asking them to temporarily wait in Mexico.

CBP says a surge in asylum claims has strained resources. The number of people expressing fear of returning to their home countries — the initial step toward asylum — jumped 67 percent at the U.S. border with Mexico in the fiscal year that ended Sept. 30 to 92,959 claims from 55,584 the previous year.

Critics contend that CBP is limiting the number of asylum claims to deter people from coming.

In San Diego, U.S. authorities funnel asylum claims through the San Ysidro port of entry, the nation’s busiest crossing. Asylum seekers themselves manage waiting lists in a tattered notebook on the Tijuana side.

People who appear at the city’s other crossing, Otay Mesa, are directed to the San Ysidro before they reach U.S. soil. But Monday’s crowd managed to reach U.S. soil, according to Ramos, which usually means they are transferred to San Ysidro to have their claims processed immediately

Ramos said the 21 Hondurans who sought asylum were at heightened risk for staying in Mexico. /atm