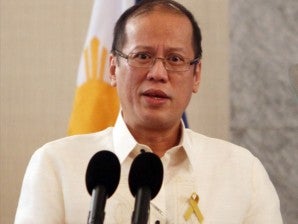 Palace officials on Tuesday joined President Benigno Aquino III in stepping up attacks against the Supreme Court, warning magistrates against obstructing a popular reformist agenda and raising the specter of a people power uprising against them.

At the Christmas party for the Liberal Party in Malacañang, Mr. Aquino rallied his troops to help him fulfill his campaign promise to prosecute misdeeds allegedly committed during the previous Gloria Macapagal-Arroyo administration.

“I’d like to think God is making us instruments of His will and at the end of the day, we have been given an opportunity to really transform so much of our country and especially the lives of our people,” the President said.

“The battle that is looming will not be easy,” he said, vowing to fulfill his campaign promise that when he leaves office in 2016, “what we leave is better than what we found.”

Later at a women’s news forum at Sofitel Hotel, Mr. Aquino said his Christmas wish was for Chief Justice Renato Corona to “revisit the oath that we all in government” made, repeating his earlier calls that the majority magistrates should be loyal to the people and not to Arroyo who appointed them.

The President said he also wished this Christmas that Arroyo, now a Pampanga representative who is under hospital arrest for electoral sabotage, would confess to her wrongdoing.

“Perhaps she can rectify what has been done by helping really achieve the reforms and transformation of society by telling us what exactly was done, how it was done, what were the loopholes that were exploited and so on and so forth,” he said.

Budget Secretary Florencio Abad, Presidential Adviser on Political Affairs Ronald Llamas and congressional allies  also went on the offensive a day after Mr. Aquino launched his most scathing assault yet on the high tribunal, questioning the legitimacy of Corona as Chief Justice and his perceived loyalty to Arroyo.

Both Abad and Llamas harped on the President’s theme of accountability to the people and the justness of the cause against Arroyo as Palace supporters in media called for an “occupy Supreme Court” movement copied from a protest in New York against economic imbalance and corporate greed.

Llamas said the President’s tirades on Thursday at the Makati Business Club anniversary and on Monday at the First National Summit on Criminality in front of Corona were an “attempt to remind the Chief Justice and the other members of the justice apparatus of the people’s agenda and the obligation of public officers in responding to this.”

“(President Aquino) is just echoing the sentiments of the vast majority, who feel that genuine justice cannot be served when the Chief Justice and the majority of the Supreme Court are loyal and accountable to only one person—GMA (Arroyo)—and disregard the interests of the majority,” Llamas said in a text message. “I think that if you ask the ordinary citizen if they feel that the Supreme Court is partial to GMA, the answer will be a resounding  ‘yes.’”

“The President is just being true to his nature as well as his mandate—integrity against cynicism and impunity. And to this, he really has to move out of the box,” Llamas said. “It really isn’t easy to be on the straight path. Especially at the start, it’s the most difficult.”

Abad said the President’s blasts were not meant to influence the high tribunal in cases involving Arroyo.

“It was in no way meant to influence the decision of the high court on cases involving Arroyo before it. It was meant principally to remind our people in government, especially the high court, about where governmental power emanates from, whether you’re in the executive, legislative or judiciary,” Abad said.

“It is from the people. And every high official and institution of government must always keep that freshly in mind,” he added.

Speaking at a press conference, Assistant House Majority Leader Romero Quimbo and Ifugao Representative Teddy Brawner said the justices should not be too sensitive on interbranch debates, saying this was a sign of a healthy democracy.

“When the judiciary strikes down some of the things that we pass here as being unconstitutional or even devoid of any legal basis, we take it in stride,” Quimbo said. “We were not piqued.”

“Let’s not overreact,” Brawner said, adding the court should not be treated as a “sacred council.”

Critics said the Palace was talking about a “mob rule.” Senator Panfilo Lacson warned that Malacañang was sending a  signal to local officials in the provinces that they could ignore court rulings and feared this could lead to anarchy.

The electoral sabotage charge against Arroyo stemmed from a claim by a provincial official in Maguindanao that he overheard Arroyo order then Governor Andal Ampatuan Sr. a 12-0 sweep for administration candidates in the province in the 2007 senatorial elections. This official is facing charges in connection with the 2009 massacre of 57 people in Maguindanao.

Senator Aquilino Pimentel III, the principal complainant in the election irregularities in Maguindanao, has said he did not think the government had enough evidence in the case against Arroyo, who is currently confined at St. Luke’s Medical Center, where she is undergoing treatment for a rare bone ailment.

Most of the members of the Supreme Court were appointed by Arroyo during her nine years in power. Corona’s appointment as Chief Justice, on the other hand, has been criticized as a midnight appointment, made two days after the May 2010 elections.

But the high tribunal has ruled on the legality of Corona’s appointment and the executive branch later acknowledged the court’s decision on the case.

Mr. Aquino has also decried the series of setbacks the administration had suffered in connection with his attempts to prosecute Arroyo.

He has railed at the court’s issuance of a temporary restraining order—an extraordinary measure  to prevent irreparable harm and protect the people from the awesome powers of the state—that Arroyo sought when she was stopped from leaving abroad for medical treatment. The Palace said Arroyo was attempting to evade prosecution.

The President is also smarting from the Supreme Court’s rejection of the Philippine Truth Commission he created by executive fiat to investigate claims of irregularities committed by Arroyo.

The court said the formation of the panel was a violation of the equal protection clause in the Constitution because it was simply targeting Arroyo.