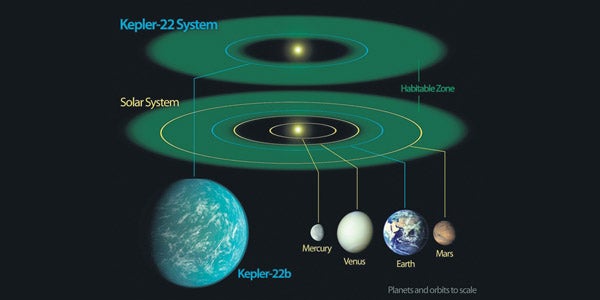 EARTH CONDITIONS This Nasa artist’s illustration shows Kepler-22b, a planet known to circle the habitable zone of a sun-like star. In another step toward finding Earth-like planets that may hold life, Nasa said the Kepler space telescope had confirmed its first-ever planet in a habitable zone outside our solar system. Confirmation means that astronomers have seen it crossing in front of its star three times. But it doesn’t mean that astronomers know whether life actually exists there, simply that the conditions are right. AFP

WASHINGTON—A newly discovered planet is eerily similar to Earth and is sitting outside Earth’s solar system in what seems to be the ideal place for life, except for one hitch. It is a bit too big.

The planet is smack in the middle of what astronomers call the Goldilocks zone, that hard-to-find place that is not too hot, not too cold, where water, which is essential for life, does not freeze or boil. And it has a shopping mall-like surface temperature of near 22 degrees Celsius, scientists say.

The planet’s confirmation was announced on Monday by National Aeronautics and Space Administration (Nasa) along with other discoveries by its Kepler telescope, which was launched on a planet-hunting mission in 2009.

It is the first planet confirmed in the habitable zone for Kepler, which already had found Earth-like rocky planets elsewhere. Twice before astronomers have announced a planet found in that zone, but neither has been as promising.

“This is a phenomenal discovery in the course of human history,” Geoff Marcy of University of California, Berkeley, one of the pioneers of planet-hunting outside Earth’s solar system, said in an e-mail.

“This discovery shows that we Homo sapiens are straining our reach into the universe to find planets that remind us of home. We are almost there,” Marcy said.

The new planet, named Kepler-22b, has key aspects it shares with Earth. It circles a star that could be the twin of Earth’s Sun and at just about the same distance. The planet’s year of 290 days is even close to Earth’s. It probably has water and rock.

The only trouble is the planet’s a bit big for life to exist on the surface. The planet is about 2.4 times the size of Earth. It could be more like the gas-and-liquid Neptune with only a rocky core and mostly ocean.

The planet is 600 light years away. Each light year is 9.4 trillion kilometers. It would take a space shuttle about 22 million years to get there.

Floating on that “world completely covered in water” could be like being on an Earth ocean and “it’s not beyond the realm of possibility that life could exist in such an ocean,” Batalha said in a phone interview.

Kepler cannot find life itself, just where the conditions might be right for it to thrive. And when astronomers look for life elsewhere, they are talking about everything ranging from microbes to advanced intelligence that can be looking back at us.

So far the Kepler telescope has spotted 2,326 candidate planets outside Earth’s solar system with 139 of them potentially habitable ones.

Even though the confirmed Kepler-22b is a bit big, it is smaller than most of the other candidates. It is closest to Earth in size, temperature and star than either of the two previously announced planets in the zone.

The confirmation of one of two, though, has been disputed. The latest discovery has been confirmed several ways, including by two other telescopes.

For Marcy, who is on the Kepler team, the newest planet is a smidgen too large. But, “that smidgen makes all the difference,” he said.

Because its size implies that it is closer to Neptune in composition than Earth, “I would bet my telescope that there is no hard, rocky surface to walk on,” Marcy said.

Borucki thinks the planet is somewhere between Earth and gas-and-liquid Neptune, but that it has a lot of rocky material.

It is in a size range that scientists do not really know anything about. Measurements next summer may help astronomers have a better idea of its makeup, Borucki said.

Kepler spots a planet when it passes in front of its star. Nasa requires three of those sightings before it begins to confirm it as a planet. Borucki said the third sighting for Kepler-22b happened a year ago, just before the telescope shut down for a while. It took several months to finish the confirmation.