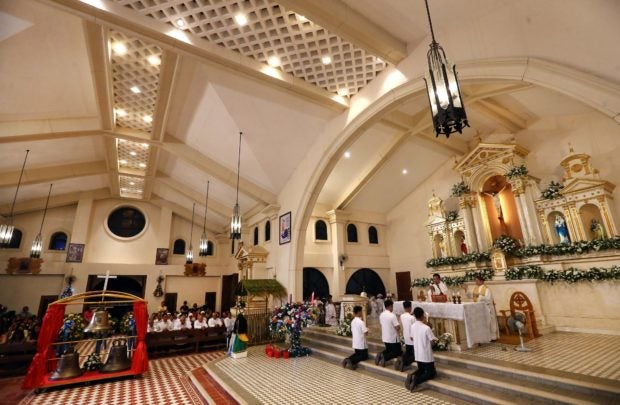 SOMBER TRIBUTE The three bells of Balangiga (left), finally home after an absence of 117 years, take pride of place near the altar of St. Lawrence the Martyr Church as the parish priest, Fr. Serafin Tybaco Jr., celebrates the start of “Misa de gallo” in Balangiga, Eastern Samar. —LYN RILLON

BALANGIGA, Eastern Samar — St. Lawrence the Martyr Church here had not seen an overflow of devotees during a “Misa de Gallo” for a long time.

But the first day of the traditional novena of Masses at dawn on Sunday was special for the residents of Balangiga.

They all came to hear the ringing of the three bells that had just been returned to them 117 years after these were taken as war trophies by the Americans.

At 4:15 a.m., the smallest of the three bronze bells, which were mounted on a movable platform made of gold-painted steel and built by the Department of National Defense, was rung five times to signal the start of the Mass.

About 900 devotees attended the two-hour Mass, which was interrupted by a power failure. The church had to use its power generator to the end of the service.

‘They are now with us’

“This is a very special Mass because the bells are now with us. The pealing of the bells is so distinctive that could not be described in words,” parish priest Serafin Tybaco Jr. told the Inquirer after celebrating the Mass.

After being colonized by Spain for more than three centuries, the Philippines became a US possession in 1898 in a new colonial era that began with the outbreak of the Philippine-American War.

American occupation troops took the bells from the church in Balangiga following an attack by bolo-wielding Filipino villagers, who killed 48 US soldiers in 1901 in one of the US Army’s worst single-battle losses of that era.

One of the bells had been sounded to signal the attack by the villagers, some of whom were disguised as women who hid in the church near an American garrison, according to historian Rolando Borrinaga, who has studied the history of the bells.

The Americans retaliated, reportedly killing villagers above the age of 10, and a US general, Jacob Smith, ordered Samar to be turned into a “howling wilderness,” Borrinaga said.

The United States returned the bells last week, ending decades of Philippine effort to recover them and closing the book on the Philippine-American War.

The three bells were officially turned over to the parish on Saturday by Balangiga Mayor Randy Graza following a ceremony at the town’s gymnasium attended by President Rodrigo Duterte and US officials led by John Law, chief of mission of the US Embassy, and US Assistant Defense Secretary Joseph Filter.

With the return of the bells, Tybaco said he hoped the already religious townsfolk would “further deepen their faith.”

Severa Duran, 80, said she was glad to see that the church was filled with the faithful.

“While there were times that the church was filled with people, today’s number of churchgoers was bigger. Perhaps, it’s because we have the bells [back],” she said.

The bells are temporarily kept inside the church. Tybaco could not say whether the bells would be placed in the belfry, which needs remodeling to receive them, or displayed on the church grounds, where three concrete stands have been built in anticipation of their arrival.

After the Mass, churchgoers flocked to the bells to touch and be photographed with them. —With a report from AP