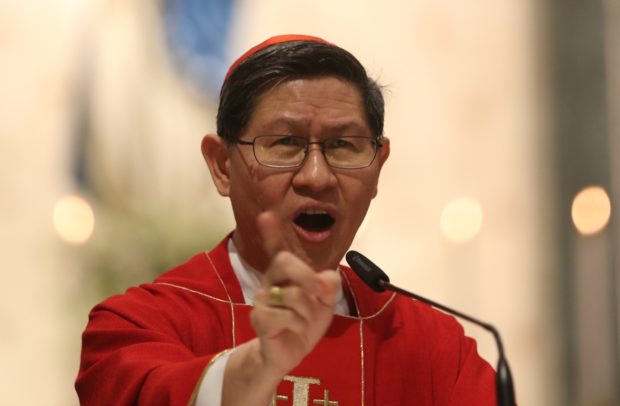 Cardinal Luis Antonio Tagle on Sunday condemned the abuse of power, saying no one should use it to intimidate others.

“Do not belittle others. That you are in high office does not mean you have the right to trample others. You will never be happy that way,” Tagle said.

“In truth, a bully, someone who uses his power to belittle others, is a fearful and insecure person,” he added.

Tagle did not name anyone but he was clearly referring to President Rodrigo Duterte, who had been attacking the Catholic clergy in recent days.

Last week, the President urged the people to kill the bishops, calling them “useless” because they did nothing but criticize his brutal war on drugs.

At the turnover on Saturday to the Balangiga parish of three historic bells returned to the Philippines by the United States, a presidential aide reportedly ordered priests and bishops to leave the plaza before the President arrived.

“Priests, including the Borongan bishop and the apostolic nuncio, were initially told to leave the Balangiga plaza minutes before the President arrived,” Catholic priest Edmel Raagas, who was at the event, told Inquirer.net in a text message.

He said the clergymen refused to leave.

The Diocese of Borongan confirmed the incident in a post on Facebook, saying the President wanted only Archbishop Romulo Valles, president of the Catholic Bishops’ Conference of the Philippines, who was his friend, to be at the ceremony.

In a Facebook post of his own, Raagas said there was a suggestion to the priests to remove their Roman collars so as not to offend the President.

He said chairs were piled in front of the priests so the President would not see them.

He said the female PMS staff member did not order the clergymen to leave but told them that “the President may say something that is degrading to us or may make us react,” in which case they could leave.

“The PMS, as far as I’m concerned, is just doing their job and it’s their job,” Tybaco said.

Tybaco did not identify the female PMS staff member.

Malacañang was investigating the complaint of Raagas, according to presidential spokesperson Salvador Panelo.

Panelo said it was “absolutely out of the President’s character nor his style to cause mortifications during an event.”

“If it indeed happened, then the same is not authorized and such unethical conduct cannot be sanctioned by the President. It could have been done by someone who represented himself or herself as a staff from the [PMS],” Panelo said.

In his homily, Tagle said his reminder, while written in the first century, should be taken as if it was written just yesterday.

He urged the faithful to share their blessings and remain honest to be truly happy, especially at Christmas. —With reports from Consuelo Marquez and Joey Gabieta