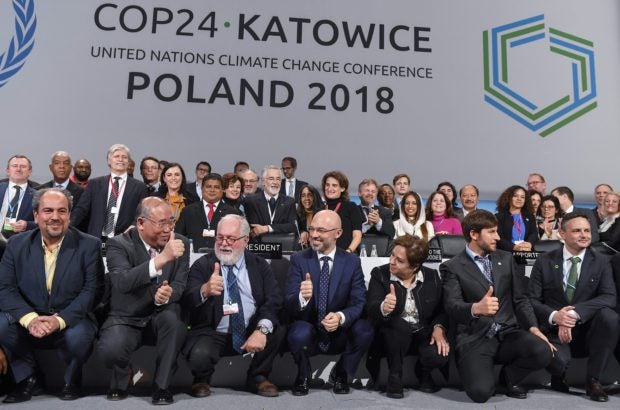 AGREEMENT AT LAST Heads of delegations gather for posterity at the end of the final session of the COP24 summit on climate change in Katowice, southern Poland, on Sunday. —AFP

KATOWICE, Poland — After more than two weeks of tense negotiations, nearly 200 countries finally struck a deal on a rule book that is seen to breathe life into the landmark Paris Agreement that was reached three years ago.

The 24th Conference of the Parties (COP24) to the UN Framework Convention on Climate Change did not sail smoothly, as clear disagreements between the positions of rich and developing countries emerged as early as the first week.

But the mounting pressure to strike a deal led to the talks finally wrapping up late Saturday night in this southern Polish city built on coal mining, extending a day from its expected finish.

The “Katowice climate package” is set to deliver on the goals of the 2015 Paris climate deal, which aims to cap global warming at 1.5 degrees Celsius above preindustrial levels.

“All nations have worked tirelessly. All nations showed their commitment,” said Michal Kurtyka, the state secretary of the Polish energy minister who served as COP24 president.

“Through this package, you have made a thousand little steps forward together,” he added. “All nations can leave Katowice with a sense of pride, knowing that their efforts have paid off.

The agreed 156-page package sets how nations will provide information on their nationally determined contributions, which shows how they deliver their local climate actions.

It also spells out the guidelines for the establishment of new finance targets to support developing countries from 2025 onward.

Environmental campaigners, however, cautiously welcomed the agreement, saying that the text could have been made more ambitious in the face of the urgency of the climate crisis.

A recent report by Climate Action Tracker said that with the current policies, the world was still heading toward 3.3 C.

A sticky point in the negotiations was the incorporation of the findings of the UN-backed Intergovernmental Panel on Climate Change (IPCC) on the catastrophic events that could happen if urgent and radical actions are not done to slash carbon emissions by 2030.

At the end of the first week, the United States, Russia, Saudi Arabia and Kuwait blocked the move to welcome the IPCC report, saying it was enough to simply “note” it.

In the end, the decision merely expressed gratitude for the work of the scientists and invites countries to use the findings from the study.

Greenpeace international executive director Jennifer Morgan said the governments had let the people down as they “ignored the science and the plight of the vulnerable.”

“Without immediate action, even the strongest rules will not get us anywhere. People expected action and this is what governments did not deliver,” she said. “The IPCC report should be the call to action — action that matches the pace and scale of the threat.”

Activists also assailed the lack of references to human rights in the rule book.

As delegates return to their home countries, she said they must “remember that they are already bound by international agreements to respect human rights and that these must drive how they implement necessary climate action and ensure equity.”

The integrity of “carbon markets,” or the trading of emission allowance to encourage countries and companies to limit their carbon emissions, was another major bone of contention in the talks.

Unable to reach an agreement until the last minute, delegates eventually decided to put off the issue until next year.

Several groups assailed the “overbearing presence” of fossil fuel companies during COP24, which cast a shadow over the climate talks.

Officials from the Trump administration were heckled for the second year in a row for promoting coal, gas and nuclear energy in the conference.

Despite corporate interests and geopolitical headwinds, the voices of the youth and the indigenous peoples were the clear standout for this year’s talks.

Greta Thunberg, a 15-year-old Swedish activist who started a global movement of school strikes for climate, was a star during COP24, mincing no words in reprimanding government leaders for their inaction.

“You only talk about moving forward with the same bad ideas that got us into this mess, even when the only sensible thing to do is pull the emergency brake,” she told the plenary.

“You are not mature enough to tell it like it is. Even that burden you leave to us children.”