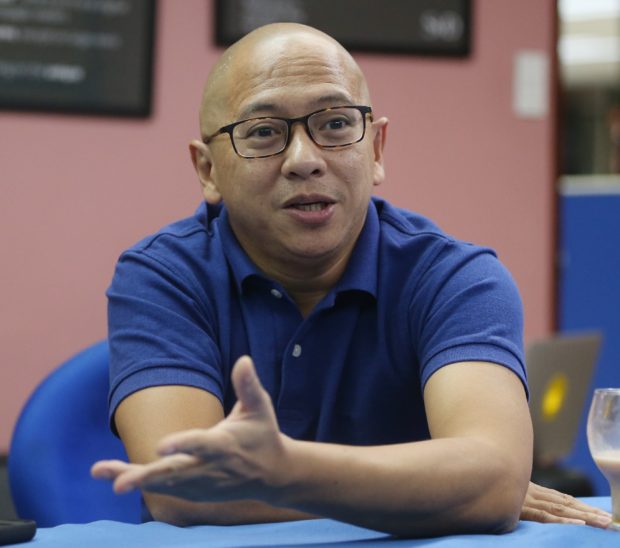 Florin Hilbay, the former top government lawyer who went toe-to-toe with adversaries before the Supreme Court and won, is girding for his fiercest battle yet.

This one will play out not before the “gods of Padre Faura” but a more formidable judge — a restless electorate — that will decide whether the opposition candidate captures one of 12 Senate seats in May.

Speaking to the Inquirer in his signature cobalt blue polo and Onitsuka kicks, the political newcomer summed up his campaign preparations with this: “I was about to say you need to be on your toes, but it’s more like on your knees.”

A recent Pulse Asia survey ranked him between 57th and 66th place.

But Hilbay, who was named after Romanian chess grandmaster Florin Gheorghiu, is determined to make his Senate run more than just a quixotic bid.

“It’s a familiar zone for me, not being considered a winner at the get-go,” Hilbay said.

Born and raised in Tondo, Manila, to a house helper and shoeshiner, he mused that victory was never given.

“It’s something you need to claim,” he said.

Two months before the campaign period, he said funding was a “problem” and described his current appearance strategy as “freestyle.”

As one might expect from a career lawyer, though, Hilbay has devised and refined one thing with precision — his opening argument.

“I usually start with my personal narrative to make people notice me,” he said.

It’s a tale that begins in Tondo, moves to his eventual education at the University of the Philippines College of Law, where he at times chose “between photocopying and eating,” and crescendoes with him topping the 1999 bar exams.

Just a year later, Hilbay became the youngest faculty member at the UP College of Law. In 2005, he could boast of a master of laws from Yale.

If the President’s approval ratings stay around the mid-70s, that crossover appeal is necessary.

Hilbay, however, is also hoping to pull off a win by doing away with traditional political calculations.

This means no mudslinging, for one. He frames it as pragmatism — his campaign rivals are potential colleagues — but it’s also emblematic of his decision to forgo divisive rhetoric in favor of appeals to one’s better angels.

“I think we need to retain our pride while doing this. We want to change the way things are run regardless of the result,” he said.

Hilbay has clear principles, but he seems most intent on being defined by his disposition — a senator who will carry a politics of compromise and decency to an institution with enough firebrands.

Voters are hungry for “reasonable politicians,” he said.

This approach was cultivated under his mentor, former Senate President Jovito Salonga, an opposition voice during the Marcos regime.

They worked together for seven years at Bantay Katarungan, which Salonga founded after retiring from politics.

Hilbay said the late senator urged him to run in 2004 as representative for Manila’s first district, but he declined.

His dream was to be a justice in the mold of Vicente Mendoza, whom he had clerked for.

But the constitutional law professor shifted gears after the rise of “an administration whose values are different from the values of the Constitution.”

“They’re using the mechanisms of the Constitution to undermine those values,” Hilbay said. “And they’re winning.”

If bringing a measure of dignity to the country’s scorched-earth politics seems a tall order, it could be a cakewalk compared to what Hilbay is trying to accomplish in cobbling together a volunteer-driven, grassroots campaign.

But the biggest adjustment so far, he quips, is always having to smile. “When you’re a professor, you can be grouchy,” he said.

In 2014, Hilbay’s appointment as solicitor general threw him to the forefront of high-profile issues like the reproductive health law and the South China Sea dispute.

The latter cemented his place in the pantheon of legal luminaries with the landmark 2016 decision of the Permanent Court of Arbitration, which invalidated China’s sweeping claims to the South China Sea — a victory Hilbay has watched slowly unravel under the President.

Absent a government post, he takes to Twitter to voice dissent. The mild-mannered lawyer is something of a rockstar to his 44,000 followers on the site, where he goes by his High School nickname “Pilo” (for pilosopo).

If elected, he pledged that Army members unhappy with the President’s pivot to China could use the Senate as a platform to “speak more openly about what’s going on.”

“The administration is able to use its communication tools to distract,” he said. “If you have a Senate that maintains its focus, it can channel its attention toward the things that matter — TRAIN law, charter change, martial law and the [South China Sea].”

His recent losing streak in the Supreme Court — where he argued for Sen. Leila de Lima and against martial law — has only bolstered his belief in the Senate, rather than the courts, as the battleground for change.

But despite a resumé straight out of central casting, Hilbay’s plunge into politics has in many ways peeled back the layers. He is again at his rawest, most familiar form — the scrappy underdog from Tondo, fighting for a seat at the table.