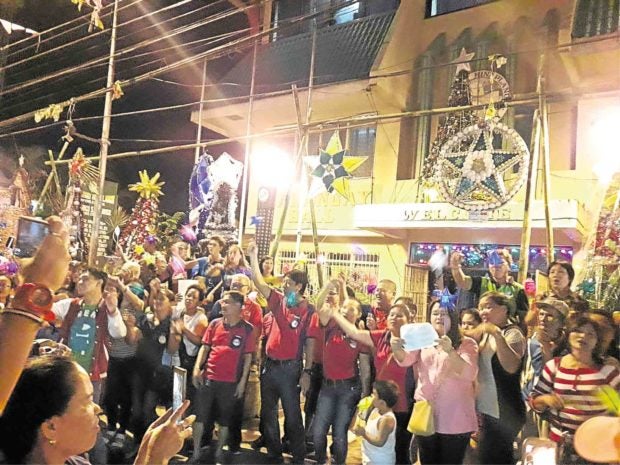 HOLIDAY BREAK Residents of the village of Hinaplanon, who survived Tropical Storm “Sendong” in 2011, gather in front of their village hall to witness the lighting of more than 20 Christmas decorations. —DIVINA M. SUSON

ILIGAN CITY — It was past midnight and pitch black on Dec. 17, 2011, when Veronico Echavez was headed home from a Christmas party at the city’s Barangay Hinaplanon. He discovered that water from the Mandulog River was fast rising.

“I was about to go back to my car when the floodwaters immediately went up. My neighbors shouted at me telling me to climb a 10-wheel truck parked nearby,” Echavez recalled.

The neighbors’ houses were already floating, some drifting downstream. Just seconds after Echavez’s family fled their house, a huge log smashed it.

It struck the hardest in Hinaplanon, leaving more than 100 dead, 400 missing, and thousands homeless. Seven of its 30 “purok” (subvillages) were erased from the map.

On Dec. 1, more than 20 Christmas trees, lanterns and other holiday symbols were lit up in Hinaplanon. Each symbol was created by the residents from each purok who have survived Sendong’s fury.

Echavez, who is still the village chair, said it took the people two years after the storm to feel again the Christmas spirit.

In 2014, the barangay council decided to assign each purok to put up one Christmas tree and decorate it with any material and colorful lights.

“We decided to make this a tradition to switch on our Christmas symbols every Dec. 1 to show to the world that we have taken off from the calamity,” Echavez said in his message during a simple program.

He credits the purok presidents, barangay workers and residents for extending their support to one another.

Although Hinaplanon has already moved on and businesses have resumed normal activities, the trauma of its people is still there, Echavez said.

“I could still cry in fear when I talk about what we went through that night,” he said.

“My whole family was separated by the strong current of waters. I already gave up, praying, ‘Lord, I’m ready to go, you can take me, but please make my wife and children safe, please keep them from harm,’” Echavez recounted.

It was already morning of the following day when he saw and gathered together his family members. His granddaughter, then 2 months old, floated to safety in a big plastic container, he was told.

“It was heartbreaking seeing my whole barangay in complete mess. As father of the community and a survivor, I did not know where to start, what to do,” Echavez said.

Bayug Island was a heartbreaking story, he said. The entire community, where thousands of people lived in nine purok, was wiped out by muddy waters, giant boulders and huge logs.

“There were purok with only two or three houses left,” Echavez said.

After the disaster, Bayug was declared a “no build zone” based on an assessment of the Mines and Geosciences Bureau. The city government passed an ordinance concurring with the report.

Loyalty and ‘utang na loob’ in the Duterte administration