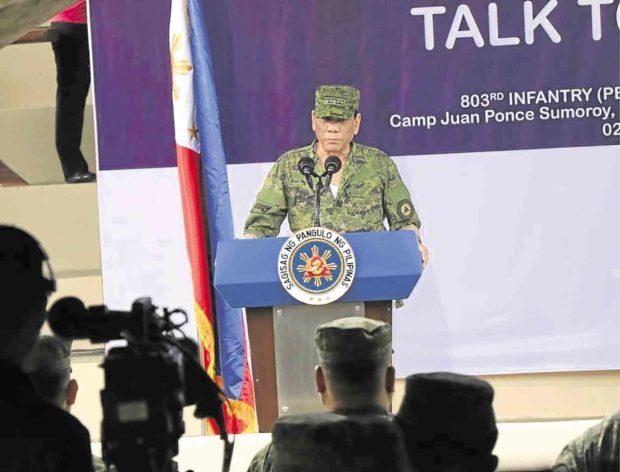 LUCENA CITY — Former Special Assistant to the President Christopher Lawrence “Bong” Go, one of the persons closest to President Rodrigo Duterte, has appealed to New People’s Army (NPA) rebels not to shut the door to peace negotiations with Mr. Duterte.

“I call on the NPA to trust President Duterte,” Go told reporters in San Andres town, Quezon province, on Thursday.

“There is no other leader like him who will sincerely talk peace with you,” he said.

“If you will wait until President Duterte’s term ends, you would have difficulty looking for another leader to talk with,” added Go, who was in San Andres for a senior citizens’ event.

Communist rebel leaders had said they would prefer to wait until the President stepped down at the end of his term in 2022 rather than pin their hopes for a peace deal on him.

Peace talks between rebels and the Duterte administration started on a high note after four rounds of negotiations to bring a peaceful end to the 50-year-old communist rebellion.

But on Nov. 23 last year, Mr. Duterte signed Proclamation No. 360 that terminated peace talks with the National Democratic Front of the Philippines (NDFP), the umbrella group of all underground communist organizations.

The President had accused the Communist Party of the Philippines (CPP) of insincerity and denounced its armed wing, the NPA, for continued attacks on government forces.

Last month, the President closed all doors to the possible revival of stalled peace talks.

He also ordered government forces to launch all-out offensives against the NPA.

NDFP leaders, however, said they were always ready to meet with government negotiators for the purpose of reviving the talks.

Go recalled that when the President was Davao City mayor for more than 20 years, the two of them had been in NPA mountain lairs more than 50 times for the release of policemen and soldiers who had been held captive by rebels.

“We have no bodyguards, no firearms,” Go said. “That’s how we trusted NPA before,” he added.

The President then was considered by communist rebels an ally and sympathizer.

Go had been in the President’s employ for almost 20 years, acting as his longtime trusted aide starting when the President was still mayor.

Go quit his position to run for senator in the 2019 midterm elections.

Go said he wished that the government had reciprocated the truce declared by rebels for the holidays.

“For me personally, I want the government to observe a temporary ceasefire,” Go said.

“No Filipino would want to kill fellow Filipino,” he said.

He said he had no idea if the President would issue an order to suspend military operations against the NPA for the holidays.

The CPP called for the truce to allow rebels to celebrate its 50th founding anniversary on Dec. 26.

Defense Secretary Delfin Lorenzana had rejected calls for the government to reciprocate the rebels’ gesture.

This would be the first time that the Armed Forces of the Philippines was not even contemplating on declaring a ceasefire with the NPA.