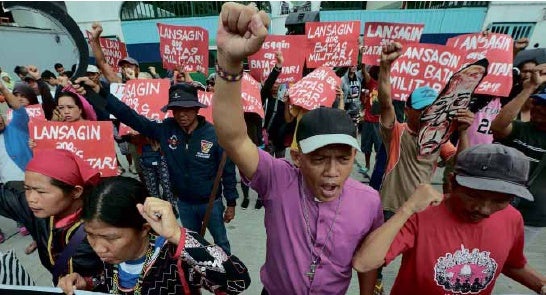 FIGHT FOR RIGHTS Members of “lumad” and militant groups rally on Dec. 4 in front of the military headquarters at Camp Aguinaldo in Quezon City to demand termination of martial law in Mindanao. —GRIG C.MONTEGRANDE

DAVAO CITY — The government was trying to lure “lumad” to serve as militiamen with increased financial aid to members of the Citizen Armed Forces Geographical Unit (Cafgu), according to a militant group.

The move would pit lumad against fellow lumad in the struggle to protect ancestral land, said the group Kalumaran, through one of its leaders Dulphing Ogan.

Ogan said Cafgu members’ monthly allowances “serve as monetary incentive to recruit more lumad to be part of force multipliers in the hinterlands.”

“This is a clear signal from the Duterte administration that it would strengthen and establish more paramilitary groups,” Ogan said.

A militia operating in indigenous people’s (IP) communities was the Alamara or Magahat-Bagani, which had been blamed for the killing of lumad leaders and attacks on lumad schools.

Cafgu members acknowledged as part of the military roster would get P7,000 in monthly financial assistance covering November and December, according to EO 69.

This would be on top of Cafgu salaries and current allowances.

Ogan said it was clear that the President used what he said was “sulsol-suhol” tactic “to order the killing of lumad civilians” after tagging them as NPA guerrillas or supporters.

He said it was already known that government troops planted evidence on civilians and presented them as NPA guerrillas.

He said the move to strengthen the Cafgu had been a source of conflict and division among lumad, as some lumad were forced to join militias because they didn’t have lands to till anymore.

“Like us they, too, are poor and displaced from their ancestral lands,” Ogan said.

“They are forced to join because they don’t have any productive thing to do because their lands were forcibly taken from them,” he added.