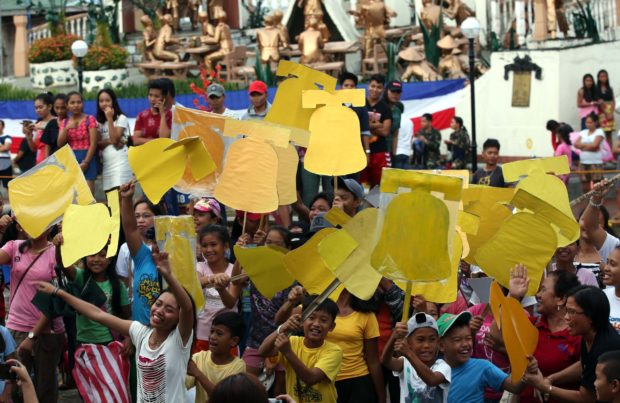 Schoolchildren in Balangiga wave paper cutouts of church bells to welcome the return of the historic Balangiga bells to their town on Friday. The bells were taken as war booty by American troops in 1901 to avenge the death of 48 US soldiers killed in a local uprising. (Photo by LYN RILLON / Philippine Daily Inquirer)

BALANGIGA, Eastern Samar — After 117 long years, the historic church bells of Balangiga in Eastern Samar were brought home to end one of the darkest chapters of history between the United States and the Philippines.

US soldiers took three of church bells from Balangiga as war trophies in 1901 after razing the town and killing thousands of Filipinos, avenging a surprise attack that left 48 of their comrades dead.

The Philippines has argued for decades that it was historically wrong and needed to be corrected.

On Saturday, the bells were finally handed over to Balangiga officials and church leaders after delivery to the Philippines early this week.

Children of the town also waved bell-shaped signs as euphoric residents in Balangiga gathered to welcome home the three bells.

“The significance is that we finally won the battle. The battle was a big bang. This is a bigger bang,” Nemecio Duran, 81, told reporters in an interview.

Duran descended from Vicente Candelosa, who rang the bells in 1901 to signal the surprise attack against the Americans soldiers.

He added that because of the return of the bells, town residents were like “walking in the clouds.”

The Philippine government, the Catholic Church, and Balangiga residents had been seeking the recovery of the bells since the 1950s.

It was only in August 2018 that US Defense Secretary Jim Mattis finally signed the document allowing the bells to be returned to the country.

This was after President Duterte, in his State of the Nation Address in 2017, asked for the return of the bells.

However, Duterte refused to take sole credit for the return of the bells, noting that it was returned upon the demand of the Filipino people. /atm

READ: Duterte credits Filipinos for the return of Balangiga bells