Duterte credits Filipinos for the return of Balangiga bells 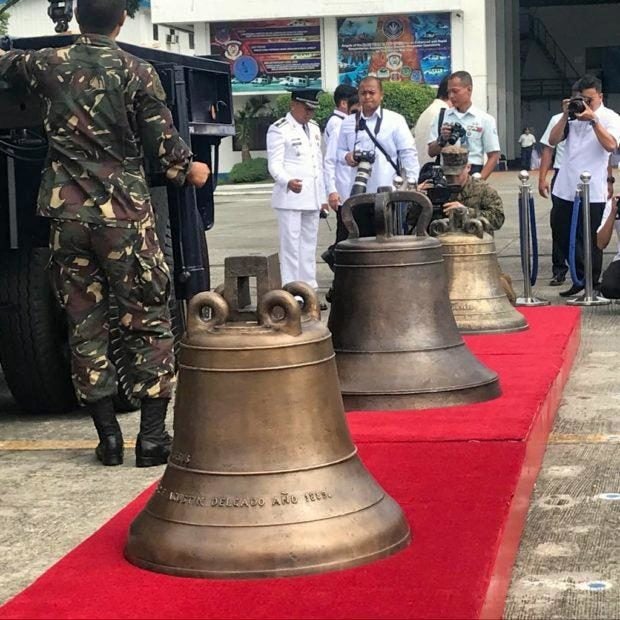 MANILA, Philippines — President Rodrigo Duterte on Thursday said no one should take credit for the return of the Balangiga bells to Manila, which was taken by the Americans as war trophies in 1901.

“The return of the bells were upon the demand of the Filipino people. Nobody, but nobody, should ever claim success for that,” Duterte said in his speech during the unveiling of the marker of Las Piñas drug rehabilitation center.

The bells arrived in the Philippines on Tuesday but Duterte skipped the handover ceremony at the Villanor AIrbase in Pasay City.

The US Army took the Balangiga Bells during the Philippine-American War in 1901, where thousands of FIlipinos were killed.

Duterte first made the call for the United States to bring the bells back to Balangiga Church in Eastern Samar during his second State of the Nation Address (Sona) in 2017.

Duterte will lead the handover of the Balangiga bells in Eastern Samar on Saturday after Malacañang initially said he would skip the event.

“It’s a property of the Catholic faith — the Roman Catholic faith. But I’d like to order the protocol now. Ngayon lang pumasok sa isip ko. There’s going to be a High Mass. I will not be there. I will just float along the coastal shores of Samar,” he said.

“It’s going to be like this. The American government will give it back to me. Then I will give it to the local executives. And the local executives will turn it over to its rightful owner, the people of Balangiga and ‘yung pari doon. Kanila ‘yun. So hanggang dito lang ako. I do not want to hear the mass. I have heard all the masses in the world,” he added.