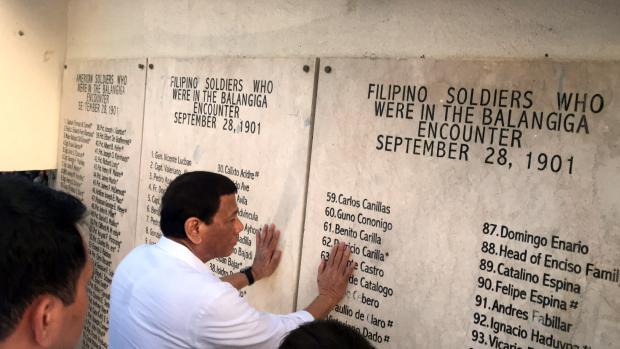 President Rodrigo Duterte visits on Saturday, Dec. 15, 2018, the memorial for American and Filipino soldiers who figured in the Balangiga encounter. (Photo by DARYL JOHN ESGUERRA / INQUIRER.net)

BALANGIGA, Eastern Samar — President Rodrigo Duterte on Saturday offered a short prayer at the memorial of the American and Filipino soldiers who figured in the Balangiga massacre that took place on Sept. 28, 1901, during the Philippine-American War.

After leading the handover ceremony of the Balangiga bells, Duterte proceeded to the memorial and prayed.

The President then spent a moment to take pictures with the Balangiga residents.

During the turnover rites, Duterte thanked the American and Filipino officials involved in the sucessful return of the church bells after 117 years.

He reiterated that no government official could take sole credit for the return of the bells.

“Let me be very clear on this. The bells are returned and it was really because of the fervent prayers of the entire Filipino nation,” Duterte said.

“Nobody can claim a singular credit or the generous act of the americans,” he said. “The bells are returned. Credit goes to the American people and to the Filipino people.” /atm