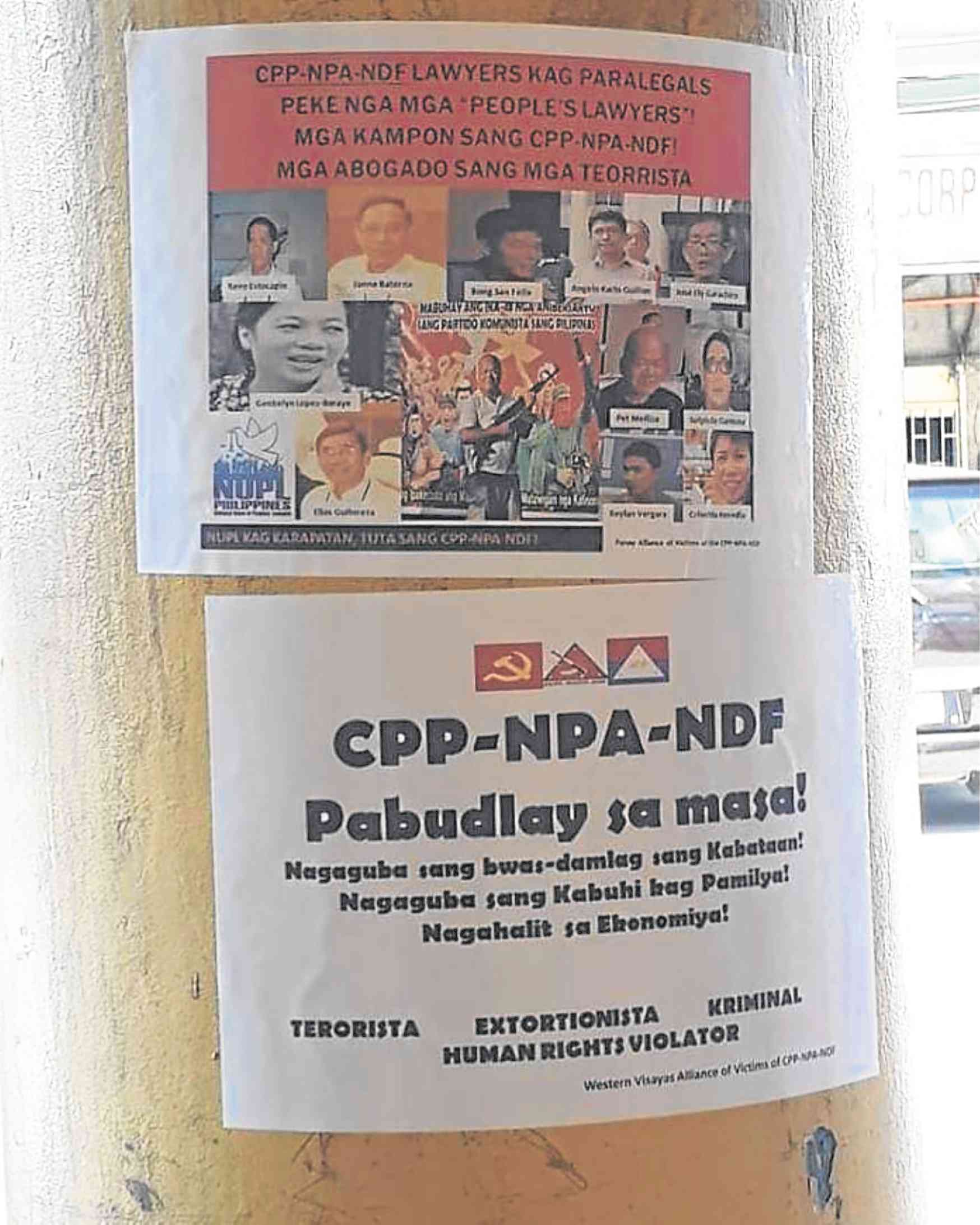 ILOILO CITY — Photographs of nine human rights lawyers in Panay depicting them as “lawyers of terrorists” and members of the New People’s Army were posted on electric posts in Iloilo City on Tuesday.

The photographs of members of the National Union of Peoples’ Lawyers (NUPL) were printed in a legal-size paper with their names and the caption, “CPP-NPA LAWYERS AND PARALEGALS. PEKE NGA ‘PEOPLE’S LAWYERS (fake people’s lawyers)’? MGA KAMPON SANG CPP-NPA-NDF MGA ABODA SANG TERORRISTA (They are lawyers of terrorists and communist rebels).”

Also included in the posters were Reylan Vergara, national vice chair of the human rights group Karapatan, and Jose Ely Garachico, a paralegal volunteer of Karapatan and NUPL in Panay.

NUPL-Panay, in a statement, said putting up these posters was “an old trick” to shame or silence government critics.

“Worse, this practice is yet preparatory or to be [used] as excuse and menu for public mind-conditioning to unleash armed attack … on the subjects of their vilification campaign,” NUPL-Panay said.

The posters emerged a day after the holding of protest actions to mark International Human Rights Day and after lawyers in Iloilo had formed an alliance against human rights violations and continued attacks on them.

At least 34 judges, prosecutors, and lawyers have been killed since President Rodrigo Duterte assumed office in July 2016, according to NUPL.

The latest victim was human rights lawyer Benjamin Ramos Jr., who was shot and killed by gunmen on a motorcycle in Sipalay City on Nov. 6.

The Integrated Bar of the Philippines (IBP) said it would ask the Supreme Court to initiate a “prompt and impartial investigation into violence against lawyers in the Philippines.”

Abdiel Dan Elijah Fajardo, IBP national president, said the group was alarmed with the harassment and intimidation of lawyers occurring with impunity.

“We can no longer stand idly by and allow this to continue,” Fajardo said in a statement sent to the Inquirer.

The group said those merely suspected or accused of crimes were being denied due process and killed.

”… Priests and lawyers [are being] gunned down in [the] line of duty. People are being persecuted for their beliefs and advocacies. Government bureaucracy is gradually militarized and those critical of the Duterte administration are vilified, ostracized, harassed and even attacked physically,” the group said in a resolution.

As citizens and members of the legal profession, the lawyers said they had the obligation to speak out and address the violation of rights and trampling of freedoms.

One of those in the posters, Jose Ely Garachico, was shot and wounded when armed men attacked him in Oton town on April 12, 2007.