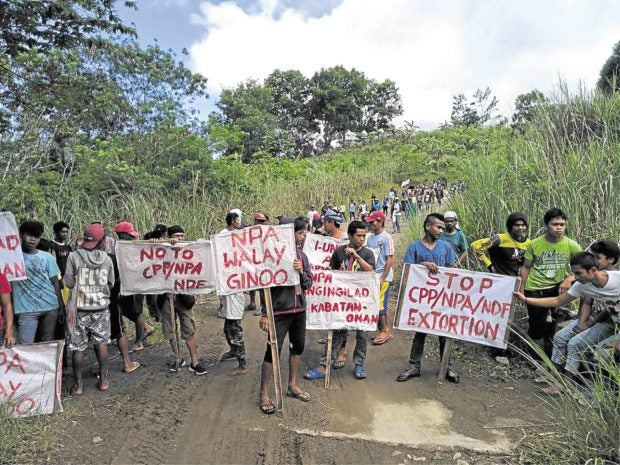 KEEP OUT Residents of Barangay Datu Ladayon in Arakan, North Cotabato, want communist rebels out of their community. —CONTRIBUTED PHOTO

On Friday, close to 500 residents staged a rally to declare the rebels “unacceptable” and “unwelcome” to their community.

“This initiative of local officials and residents of Barangay Datu Ladayon will give the NPA a very hard time in trying to recover its former lair at Arakan Valley,” Paraso said.

Datu Ladayon is the first village in Arakan to withdraw support from the NPA.

It used to be known as an NPA stronghold for several years until the military gained control of the area, according to 2nd Lt. Angelique Taban, 19th IB civil-military operations chief.

She said the village used to be under the influence of NPA Guerrilla Front 53 headed by Joel Golmatico, also known as Commander Joel or Gelo.

Taban said they would put up a detachment in the village to be run by the Citizen Armed Force Geographical Unit-Civilian Active Auxiliary under the supervision of the military.

In a resolution on Dec. 3, the Datu Ladayon council said the NPA collected revolutionary taxes from residents and harassed those who did not join or support the communist movement.

Jonathan Ramirez, Barangay Datu Ladayon chair, said the rebels used to act like “authorities” in the village, at one time even raising the communist flag at a community school until government soldiers established their presence early this year.

He said a P17-million irrigation project intended for Datu Ladayon did not push through after NPA rebels burned heavy equipment there in 2013.

Clashes between soldiers and rebels also displaced some residents. Due to lack of opportunity in the village because of the presence of rebels, many of the village’s men had gone to Davao City to work as construction workers, Ramirez said. —Bong Sarmiento