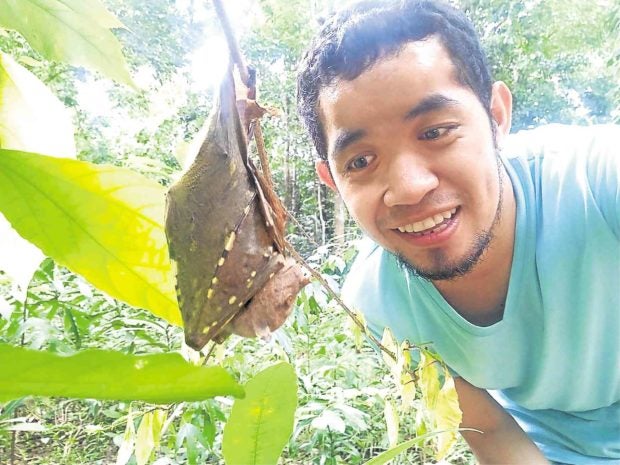 BAT LOVER Colleagues and mentors cite the late wildlife taxonomist and researcher, James Alvarez, for his contribution in the study of Philippine bats. —PHOTO FROM JAMES ALVAREZ’S FACEBOOK ACCOUNT

SAN PEDRO CITY — Colleagues and friends remember James Alvarez, a researcher at the University of the Philippines Los Baños-Museum of Natural History (UPLB-MNH), for his diligence and attention to details, the “sterling qualities” of a taxonomist-ecologist, his mentor said.

“I am deeply saddened. I consider him a son and one of our mentees to carry on with our science and advocacies when we retire,” said former MNH director, Ireneo Lit Jr.

Alvarez, 27, died Saturday as he and three other friends and UPLB graduate students were trekking Mt. Apo, the Philippines’ highest peak.

The MNH, in a statement on Tuesday, said Alvarez and his companions were on vacation after conducting training sessions for a university in Kabacan town, Cotabato province.

The group left Kidapawan City on Dec. 5 and reached Apo’s peak on Dec. 7.

During their descent, Alvarez, at a camp about 2,000 meters above sea level, fell “gravely ill” and began vomiting until the next day, the statement said.

Rescuers organized to fetch the group failed to reach them in time due to heavy rain.

The group reached a road early morning on Dec. 9 but Alvarez never regained consciousness after suffering from a seizure.

Alvarez’s remains would be flown back to his family in Lemery town, Batangas province, on Tuesday night.

UPLB would also provide counseling to his three companions.

“James is one of few to choose the off-the-beaten track of wildlife field biology. Given his talents and grit, he could have very well have chosen a more profitable, more glamorous career and yet he chose to pursue taxonomy and conservation,” said entomologist and UPLB professor, Aimee Lynn Dupo.

Alvarez, who just obtained his master’s degree on wildlife studies at the UPLB, came to be known as “batman” among his friends in the science community for his study of bats.

In 2014, he, with Lit and another scientist, worked on identifying species of “bat vampires,” or Philippine nycteribiids, published on the Brazil-based Checklist (The Journal of Biodiversity Data).

“Bat vampires,” or “little vampires,” as Alvarez called them, are bat ectoparasites or wingless insects that suck and feed on bat blood.

“Because of James, we know more about this group and about bats in the Philippines,” Dupo said.

Alvarez was named one of the Outstanding Researchers during UPLB’s Foundation Day in 2017.

In an article posted on the UPLB website, Alvarez was described as someone who would spend months in forests and mountains doing fieldwork.

He also once talked about his time spent on Mt. Guiting-Guiting, another difficult mountain to climb on Sibuyan Island, Romblon province, for research.

“I can start with bats and pursue their conservation in the long run,” Alvarez was quoted as saying. “After all, they are very important when it comes to balancing biodiversity.” —With a report from Edwin O. Fernandez