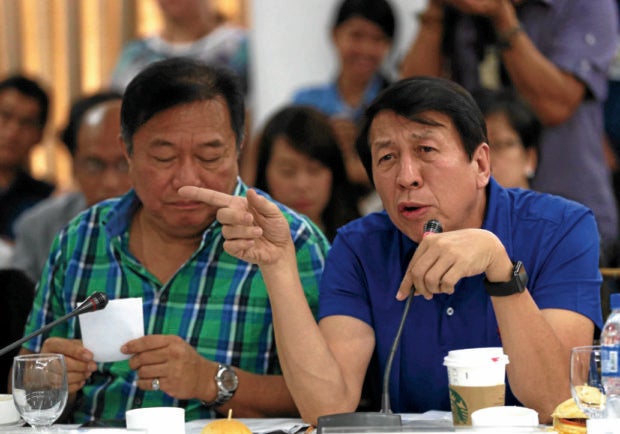 MANILA, Philippines — Former Speaker Pantaleon Alvarez’s district and that of his allies cornered the biggest billions from the “inserted” infrastructure project indicated in the proposed 2019 national budget, the House leadership revealed on Tuesday.

In a letter that House Majority Leader Rolando Andaya Jr. is set to submit to President Rodrigo Duterte, the lawmaker explained that in the 2019 General Appropriations Bill approved by the chamber, Speaker Gloria Macapagal-Arroyo’s district ranked 60th while Andaya’s district was 110th in terms of appropriations for the Department of Public Works and Highways (DPWH) projects. 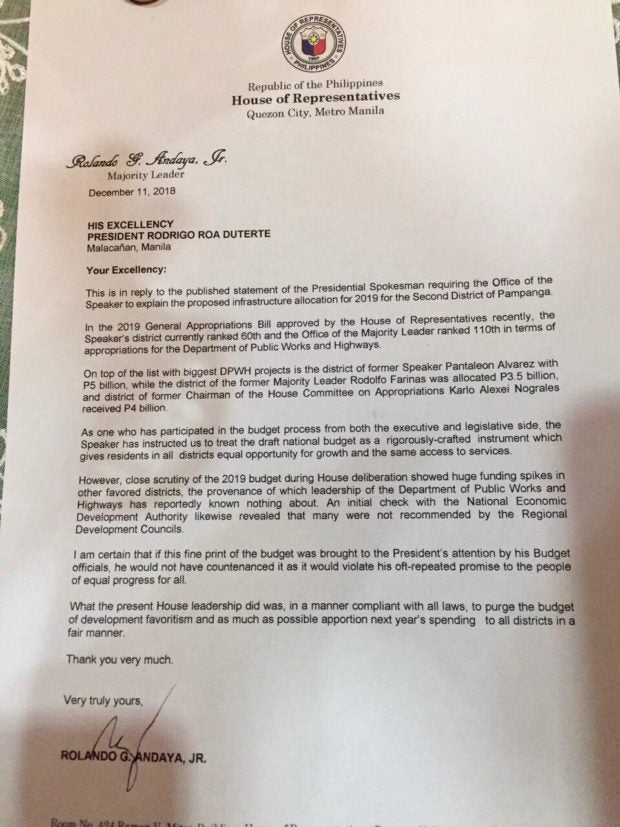 Andaya said the DPWH has “reportedly known nothing about” these inserted amounts.

He also said what the current leadership did was to “purge the budget of development favoritism” and “apportion next year’s spending to all districts in a fair manner.”

The House leader’s statement was in defense of the allegations Senator Panfilo Lacson threw in the past days.

Arroyo: ‘I’m only upper middle class’ in terms of allocations

Arroyo herself denied Lacson’s accusations that she and her allies’ districts got the lion’s share in the infrastructure fund branded by the senator as “pork barrel.”

“The important thing is the two allegations I wanted to check that I cornered it, no. There were 60-90 more who got bigger than my district. Second allegation, they were my allies, no. The previous leadership of the House had bigger, multiples of the budget of my district,” Arroyo told reporters in an interview, as she admitted that she feels being “unfairly” accused.

“Why should I deprive the people of my district? I’m only upper middle class as far as the allocations are concerned,” she added.

Alvarez denied Andaya’s claims, saying he does not know what the latter was talking about and that “Congress has nothing to do with the preparation of the National Expenditure Program (NEP).”

“I don’t know with him. I have not attended a single budget hearing. I have not seen the NEP,” Alvarez told reporters in a text message.

Andaya said the Department of Budget and Management (DBM) should explain the insertion of the controversial P51.8 billion infrastructure fund in the 2019 budget, noting how the budget agency “seemed silent” about the issue.

“It’s the so-called ‘Presidential budget’. So, kung merong mage-explain, ‘yung DBM. Sila yung nagbigay sa amin noon eh. So let them explain. But as it is, Public Works denies it, DBM is very silent on it,” he said.