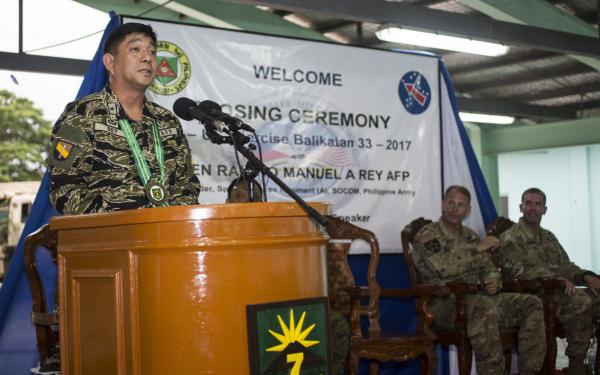 MANILA, Philippines — An Army general who played a key role during the Marawi siege in 2017 is now in charge of the military’s special operations units.

Maj. Gen. Ramiro Manuel Rey was installed as commander of Special Operations Command (Socom) of the Armed Forces of the Philippines (AFP) last week. He will oversee the special operations forces of the Army, Air Force, and Navy.

He was donned to a two-star rank during Monday’s flag-raising ceremony at Camp Aguinaldo in Quezon City.

Prior to his new assignment, Rey was commander of Special Forces Regiment (Airborne). He was also designated as commander of Joint Task Group Ranao during the Marawi siege.

The Islamic State-linked Maute Group laid siege to Marawi City for five months. It killed more than 1,000 people and it was the biggest urban war the government had faced in recent years

“As the commander of Joint Task Force Ranao, your stellar leadership led to the unity of AFP units, government agencies, local government units, religious leaders in the campaign to liberate Marawi by helping alleviate the suffering of those displaced in conflict,” said AFP chief Gen. Carlito Galvez Jr.

“As a true Special Forces paratrooper, you showed your sincerity in winning the hearts and minds of the people and courage and determination in neutralizing the adversary who dared to sow terror,” he added.

Early this year, the AFP activated its new Socom, which put all the elite forces from all branches of service under one unit.