Sereno to Filipinos: Unite in prayer vs ‘so much injustice’ 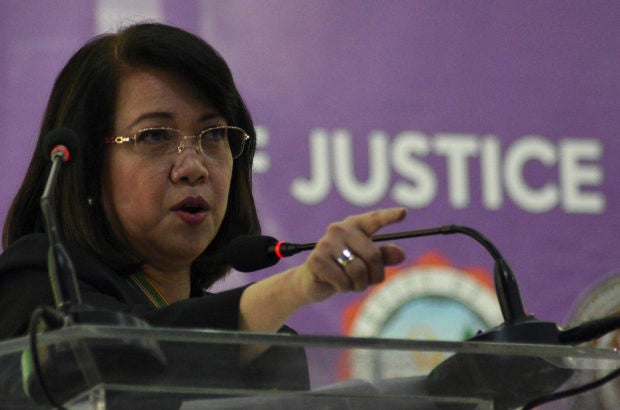 MANILA, Philippines — Ousted Chief Justice Maria Lourdes Sereno urged Filipinos to be united in prayer with the country still faced with “so much injustice.”

“When the very weapons that taxpayers money purchase for the armed forces and the police are being turned by government against the people, when the intelligence funds of government are used to hound dissent and oppress political enemies, when corruption funds the campaigns of plunderers who are allowed to go free by an unreasoned court decision, then the people must turn to God, and call out for help amidst such despair,” Sereno said at the “Our Declaration of Rights” forum in Baguio City on Monday.

The forum is in commemoration of the 70th year of the Universal Declaration of Human Rights.

In her speech, Sereno criticized the manner in which the administration’s anti-drug campaign was being conducted.

“Yes, there appears to be support for the President, for his attention to the problem of drug addiction and trade; but let me propose a frame for assessing this apparent support,” Sereno said. “If the Filipinos indeed support the President’s drug war, it cannot be support for the number of rising unsolved violent deaths associated with the drug war, as the surveys reveal that the great majority want the suspects to be captured alive, not gunned down.”

Sereno was referring to a Social Weather Station survey showing that 96 percent of Filipinos said it was important for the police to capture drug suspects alive.

She also questioned the acquittal of former Sen. Ramon “Bong” Revilla Jr. of plunder in relation to the pork barrel scam.

She called it a “very sad episode in this nation’s history.”

“We all heard the decision of the Sandiganbayan a few days ago acquitting Senator Bong Revilla of the charge of plunder that encapsulates the most recent legal abomination that has been created in the last two years,” she sai., “It is a dagger stroke to the heart of justice.”

Sereno said that it was alarming how the “brazen disregard of the law is becoming the norm” in the country.

“Not only in the drug war, but also in how corruption and dissent are treated,” she said. “The corrupt are set free, and those who point out the errors of the President are jailed or threatened.”

“One cannot escape the fact that it is the poor, the defenders of the poor, or those actively calling for observance of the rule of law by government, that are being targeted,” she added. /atm