More than 300 residents in their 60s and 70s hold sway on the streets under a city government program
By: Mariejo S. Ramos - @inquirerdotnet
Philippine Daily Inquirer / 07:26 AM December 09, 2018

Myrna Vidal, 65, starts her day while the rest of the community is still asleep.

At 4 a.m., she puts on a bright yellow-green vest, kisses her young granddaughter goodbye and sets off to her shift as senior pedestrian patroller at Santiago Syjuco Elementary School in Barangay Ibaba, Malabon.

When her husband died in October last year, Vidal had to struggle to raise by her lonesome an 11-year-old grandchild who’s still in Grade 5.

“Now I have a good reason to wake up each morning, and cope with my husband’s loss,” the widow said of her task.

Like Vidal, at least 336 senior citizens aged 60 to 70 years old have found new roles in the neighborhood under a program implemented by the office of Malabon Mayor Antolin Oreta III.

In two-day weekly shifts that last for two hours a day, these grandparents break the usual monotony of senior life and turn into road safety advocates for their extended grandchildren across the city, whose mostly narrow streets have seen an increase in vehicular traffic in recent years.

“There was a recent accident where a group of students running outside school was hit by a speeding car,” recalled Danilo Belen Marasigan, a patroller at 61. 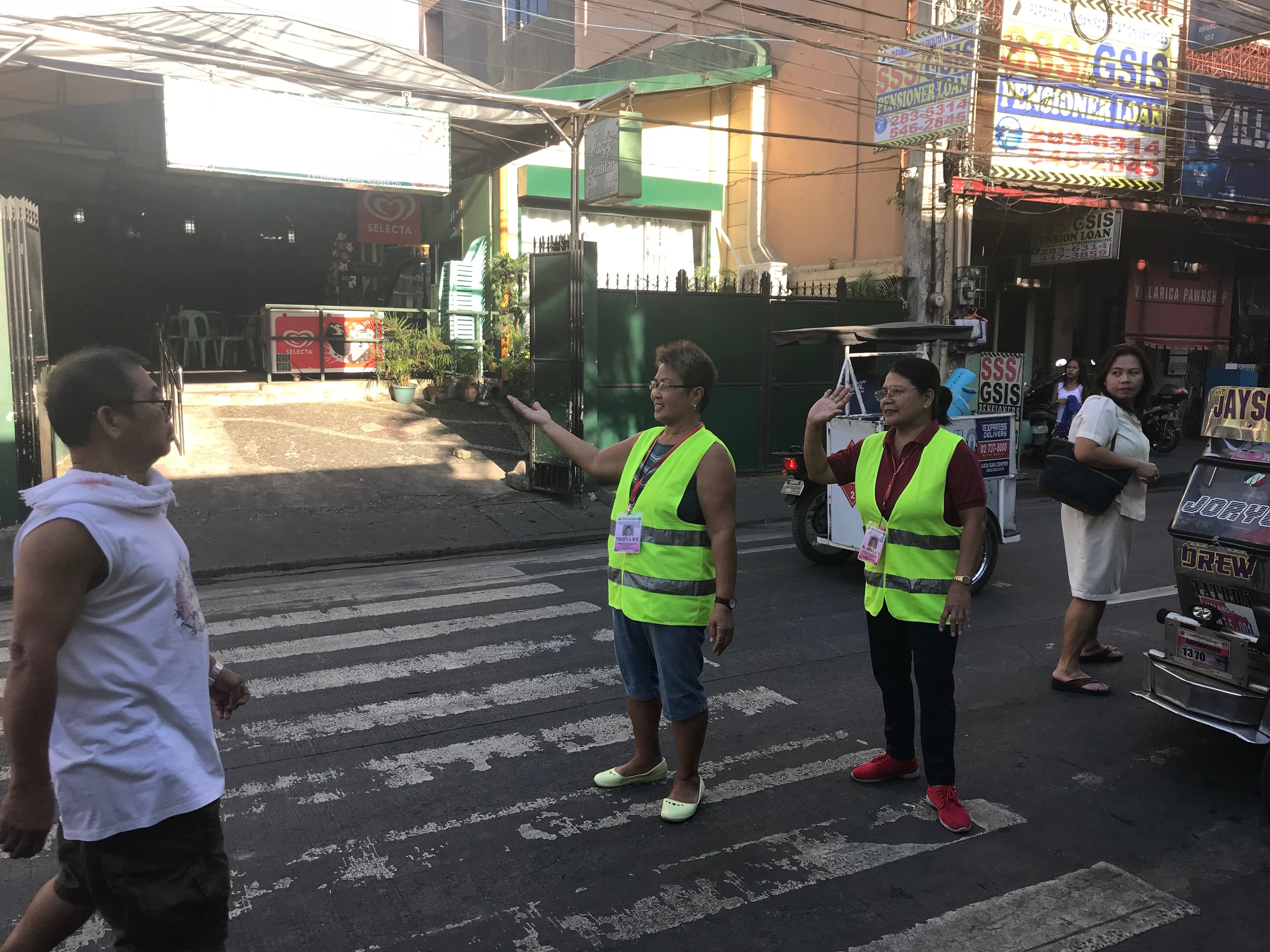 SENIORITY RULE On the streets of Malabon, the elderly patrol areas near public and private schools to make sure pedestrians and motorists follow traffic rules to keep schoolchildren safe. Malabon has deputized physically fit seniors as street patrollers to prevent road accidents, while breaking prejudices about the elderly and keeping them busy and employed. —MARIEJO S. RAMOS

Accidents like these are preventable if young students are taught how to behave on busy streets or assisted when crossing, added Reynaldo Tiangco, 66.

The answer might just be the city’s senior citizen program where lolos and lolas — as long as they are deemed physically fit for the job — are drafted to help manage the flow of motorists and pedestrians in front of 28 elementary schools in the city’s 21 barangays.

With their bright yellow-green vest and an air of grandparental authority, they keep a close watch especially on tricycle and pedicab drivers blocking pedestrian lanes.

For jeepney drivers, they have a constant reminder: “Always keep an eye on the road.”

For truckers just passing through Malabon, a sterner directive: “We would ask them to slow down or identify themselves until we feel it’s safe for the students and the community to let them  pass,” said Elenita Estember, 61.

Traffic management may be the focus but not the only aspect of their job.

Shirley Antonio, 65, said that by posting themselves at campus gates, they could help teachers and school officials ensure that students don’t cut classes and just loiter around. They also serve as extra eyes and ears for parents waiting for their children come dismissal time.

And with the gentlest touch only grandma or grandpa can give, they spare a minute or two for incoming pupils whose skewed collars or lousily worn uniforms need some fixing, telling them to “study hard” before letting them go.

At Santiago Syjuco Elementary School, Vidal and Estember alternate shifts with 10 others under a buddy system that has been in place since the program was launched in July 2018.

Members of the pioneering batch of senior patrollers are under a five-month contract with City Hall, which gives them a monthly honorarium of  P2,000 each.

“We give much weight to the words of our lolo and lola; we obey them. That’s the advantage of having senior patrollers. Even hot-headed pedicab drivers find it hard to ignore their orders. We have this deeply ingrained respect for the elderly whom we treat like our own parents,” Guevarra said.

The program is heaven-sent to the city’s more than 16,000 registered senior citizens, who make up almost 5 percent of Malabon’s total population, giving them a chance to work and earn.

The monthly honorarium means extra cash, either for their family’s daily needs or their own maintenance medicines and vitamin supplements.

And besides, “staying idle at home only makes you weaker and hasten your aging,” one patroller said.

Thanks to the program, “we don’t have to ask money from our children,” said Antonio, who also runs a small store selling toys bought in bulk from Divisoria.