From predators to protectors of sea turtles 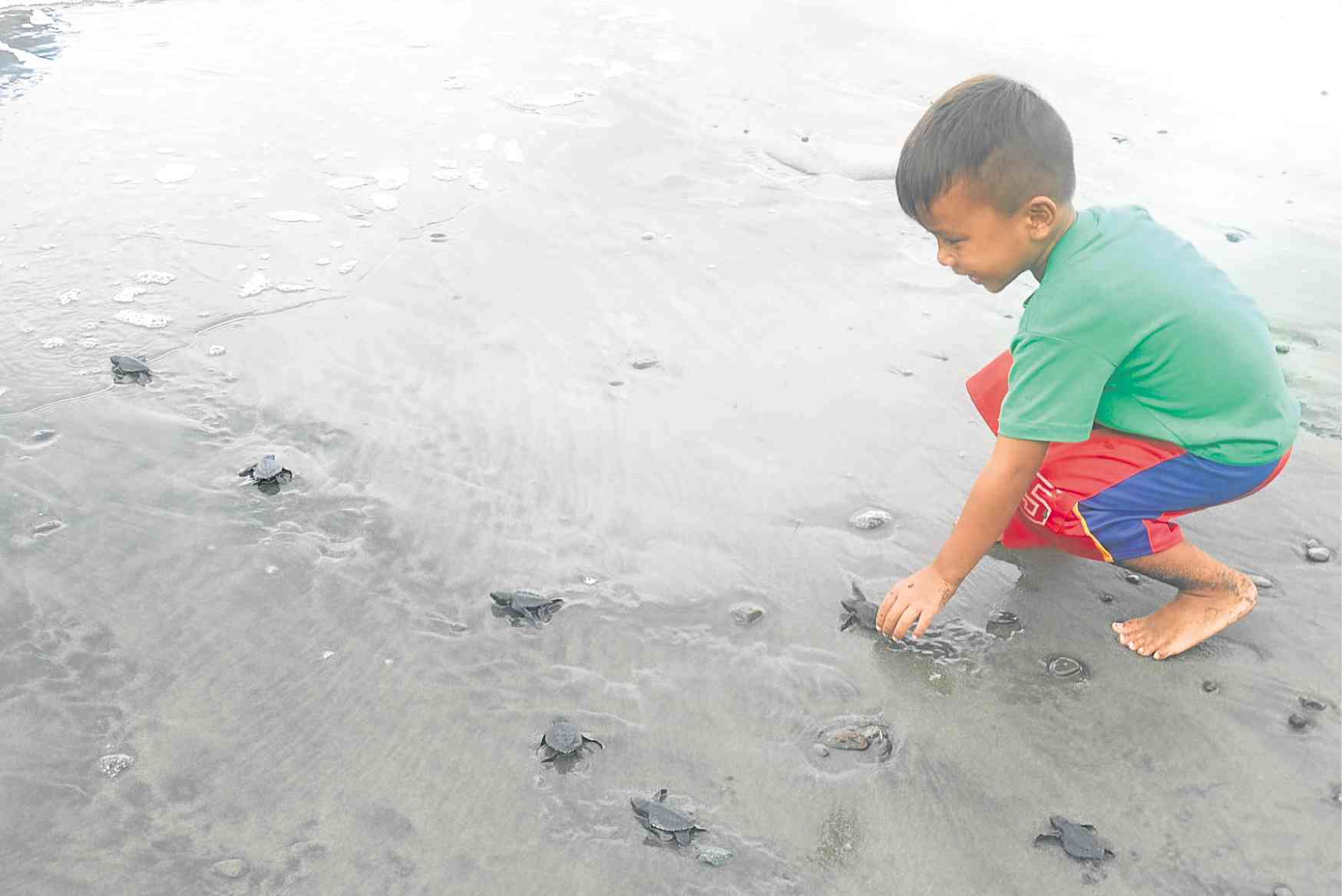 COMMUNITY ACTIVITYIn the coastal town of Maitum in Sarangani province, children are encouraged by their elders to witness and take part in the release of sea turtles hatched in their community’s hatchery. —PHOTOS BY BONG S. SARMIENTO

MAITUM, Sarangani — Under coconut trees swaying from the sea breeze, several fishermen would usually gather at a coastal village here on late afternoons to unwind from hard work with a gallon of “tuba” (coconut wine).

As Filipino culture dictates, drinking sessions would not be complete without people partaking of the “pulutan” (appetizer). In the case of the Maitum fishermen, the plate on the table would often have exotic sea turtle, locally called “pawikan.”

“The meat of sea turtle tastes like beef. We also don’t spare turtle eggs. Eating them seems to stir our libido,” fisherman Arnulfo Valderama told the Inquirer at the veranda of his small house built several meters from the shore at Barangay Kiambing.

When not consumed, the turtle meat or eggs would be bartered by some for other commodities.

That was during the 1980s, Valderama, the father of three children, quickly added. Now in his 50s, he swore to high heavens that residents were “no longer a threat” to the marine creatures.

“We no longer kill sea turtles for their meat and we avoid eating their eggs to prevent their extinction,” Valderama said. “It’s a crime to slaughter the reptiles. You can go to jail or pay fines.”

For decades, sea turtles have found safe nesting areas in Maitum and Maasim, set apart by another town but all facing the vast Celebes Sea. They belong to the olive ridley, hawksbill, green turtle and loggerhead species.

The olive ridley (Lepidochelys olivacea), also known as the pacific ridley, is the most common species. It is categorized as vulnerable, meaning its population is declining, according to the International Union for Conservation of Nature (IUCN) Red List of Threatened Species.

The IUCN classifies the hawksbill (Eretmochelys imbricata) as critically endangered, the green turtle (Chelonia mydas) as endangered,  and the loggerhead (Caretta caretta) as vulnerable.

In several villages, the turtle eggs are eventually being taken care of by residents, saving the species from extinction.

“A lot of things have changed. [Before] … the locals slaughtered sea turtles and sold their meat to the Chinese community in General Santos City. Others exchanged sea turtle eggs for rice or canned goods,” Edilbrando Paras told the Inquirer.

General Santos is about an hour away from Maasim.

“Before, the villains to the sea turtles were our people. Now, our people are heroes in the eyes of sea turtles for helping prevent their extinction,” said Paras, who acts as caretaker of the hatching facility on a parcel of property his family donated at Barangay Lumasal, Maasim.

Villagers from other communities were even turning over turtle eggs to the hatchery, he said.

He attributed the change in people’s attitude to their education campaign that emphasizes the jail terms or fines imposed by the law against violators.

In 2001, the Philippines approved Republic Act No. 9147, or the Wildlife Resources Conservation and Protection Act.

Back to the sea

Since 2015, the hatchery in Maasim, which has eight known nesting sites, has released at least 8,000 hatchlings to the sea.

It takes 45 to 60 days for the turtle eggs to hatch, and the annual nesting usually occurs from January to June.

Success in hatching using the natural method (eggs are buried in the sand, not put in an incubator) depends on the weather. When it’s sunny, average hatching rate is 90 percent and when rainy, 60 percent, according to Paras.

In Maitum, a half-hour travel by car from Maasim, a P2-million Pawikan Hatchery and Learning Center is nearing completion at Barangay Kiambing.

Nannette Nacional, the municipal environment and natural resources officer, recalled seeing the turtles on the beaches during her childhood. “They are still around until now,” she said.

Maitum was actually the first to operate a turtle hatching facility in Sarangani. The first facility was set up in Barangay Old Poblacion in the early 2000s.

As the local population grew, it was transferred to its present site in 2015, Nacional said.

Videoke noise and cottages there were distracting the turtles from nesting so the nursery was moved to a donated land in Kiambing, she added.

Nacional stressed that the villagers embraced the conservation of the endangered creatures following a sustained information and education campaign on their vital role in marine ecology. 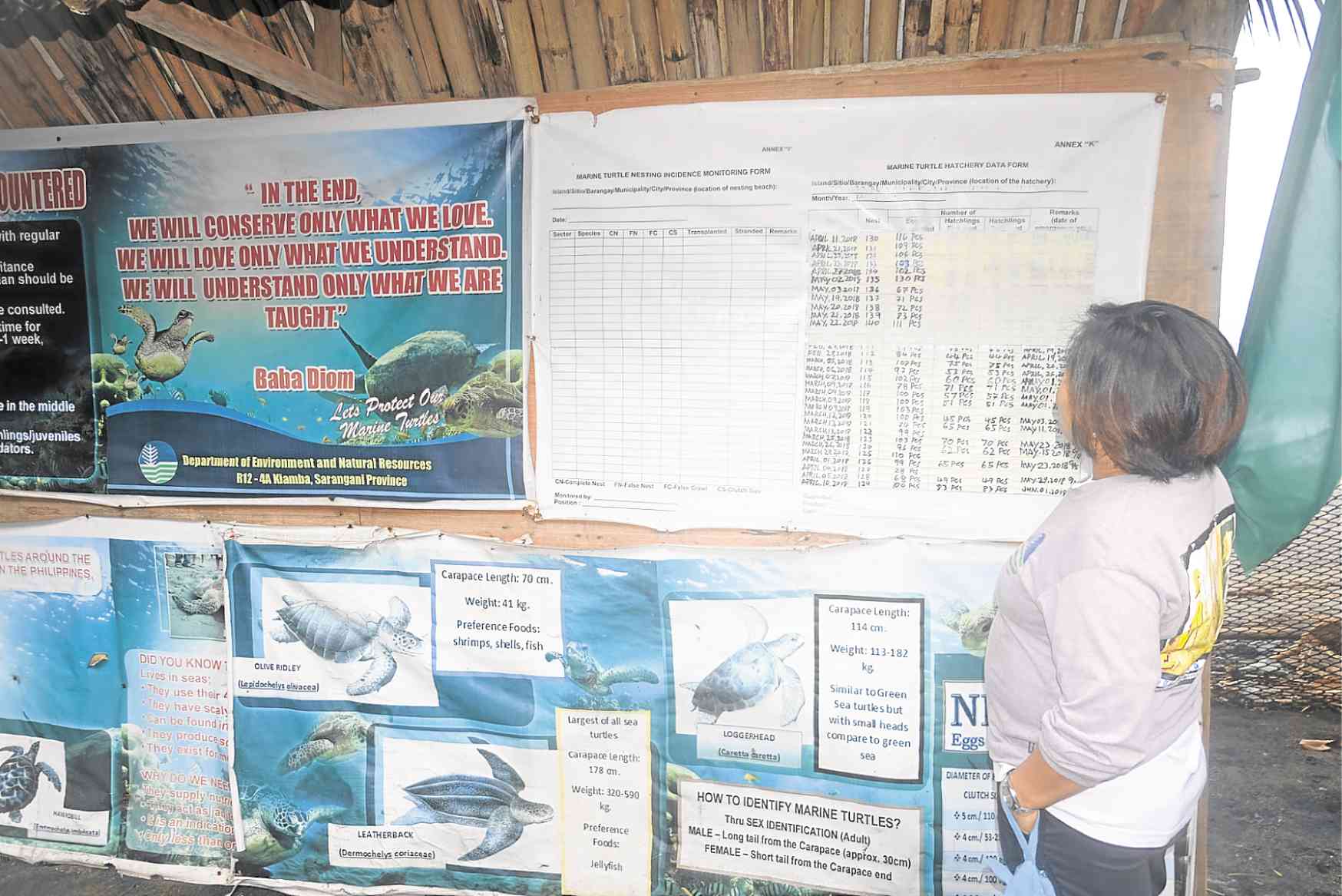 EDUCATION Information materials are available at the sea turtle hatchery at Maasim town in Sarangani to help villagers understand the value of conserving these endangered marine animals.

Jessica Guilao, chief of the Biodiversity Management Services for Makima (Maasim-Kiamba-Maitum) of the Community Environment and Natural Resources Office, described sea turtles as the “janitors” of the ocean as they feed on sea grasses and sponges.

“These sea turtles are likely among the factors why different kinds of fishes thrive in our ocean. They help maintain the health of sea grass beds and coral reefs [that are crucial for other marine elements to multiply],” she said.

Guilao stressed the need to conserve the turtles, noting that of the thousand hatchlings released to the ocean, only a few would reach maturity due to their exposure to the elements, including predators. “Out there in the wild, it’s a survival of the fittest,” she said.

“The awareness of the communities is high due to our continuing education campaign, which is a key component of our conservation efforts,” she said.

Ariel Ortiz, dean of the College of Fisheries of Mindanao State University in General Santos, commended the conservation efforts of Maitum and Maasim. 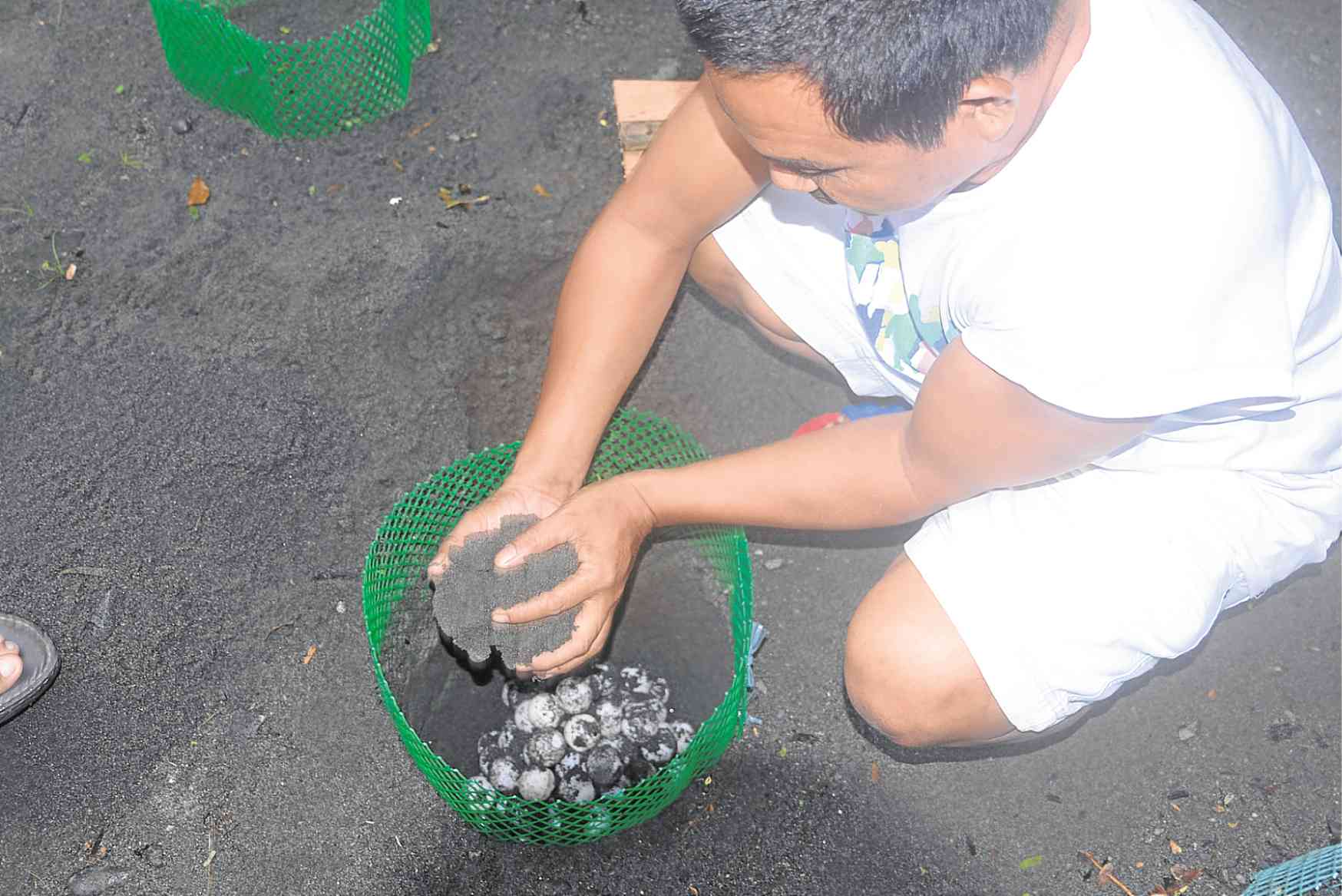 SANCTUARY A caretaker transplants sea turtle eggs that were turned over to the “pawikan” hatchery in Maasim.

“The presence of sea turtles indicates a healthy and balance marine environment. If they are not around, it means the environment is not well,” said Ortiz, a marine biologist.

For Sherwin Cuaresma, the caretaker of the hatchery in Kiambing, it is but fitting to prevent the extinction of the sea turtles.

“We don’t want our future generation to see the sea turtles only in books,” he said. 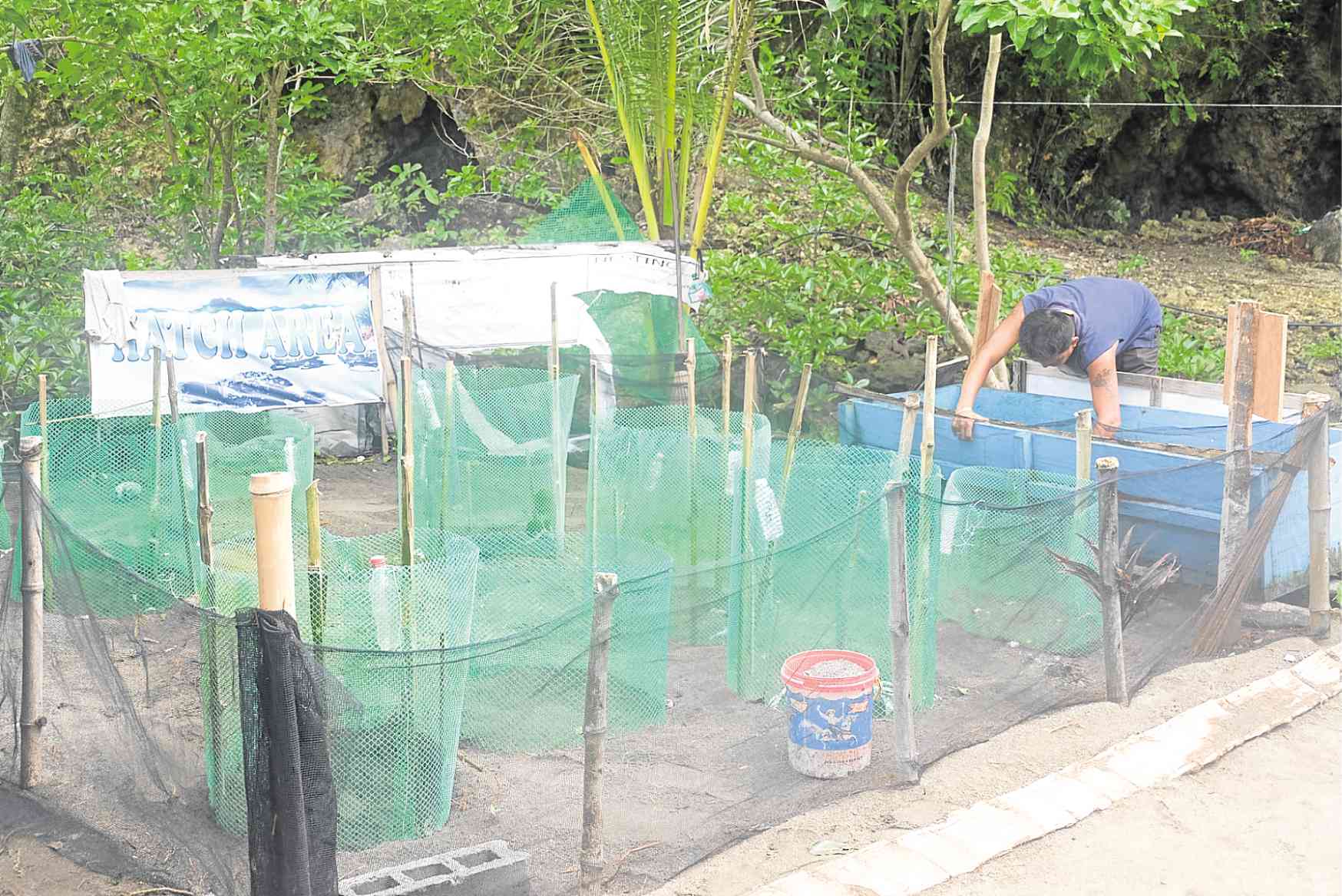