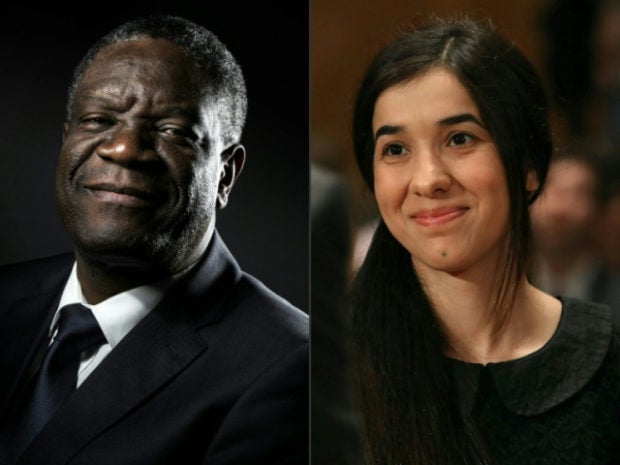 Denis Mukwege and Nadia Murad have dedicated their prize to the hundreds of thousands of women around the world who have endured sexual violence. Image: AFP/Joel Saget, Mark Wilson

Champions of the fight against sexual violence, Congolese doctor Denis Mukwege and Yazidi activist Nadia Murad, a former captive of jihadists, will on Monday receive the Nobel Peace Prize, which this year highlights rape as a weapon of war.

Murad, 25, and Mukwege, 63, will be jointly presented with the prize in Oslo, after they were announced as winners by the Norwegian Nobel Committee in October for “for their efforts to end the use of sexual violence as a weapon of war and armed conflict.”

He has been scathing about the world’s lackluster response to sexual violence in conflict.

“We have been able to draw a red line against chemical weapons, biological weapons and nuclear arms,” he told AFP in 2016.

“Today we must also draw a red line against rape as a weapon of war.”

Fellow laureate Murad has become a tireless campaigner for the rights of Yazidis since surviving the horrors of captivity under the Islamic State group, who stormed across swathes of Iraq and Syria targeting her Kurdish-speaking community.

Captured in 2014, she suffered forced marriage, beatings and gang-rape before she was able to escape.

The pair have dedicated their prize to the hundreds of thousands of women around the world who have endured sexual violence.

“Denis Mukwege is the helper who has devoted his life to defending these victims. Nadia Murad is the witness who tells of the abuses perpetrated against herself and others,” said Nobel committee chairwoman Berit Reiss-Andersen, when the award was announced on October 5.

“Each of them in their own way has helped to give greater visibility to war-time sexual violence, so that the perpetrators can be held accountable for their actions.”

The co-laureates have come to represent the struggle against a global scourge that goes well beyond any single conflict, as the #MeToo movement has shown.

Mukwege has treated tens of thousands of victims — women, children and even babies just a few months old — at Panzi hospital which he founded in 1999 in DR Congo’s South Kivu.

Murad was among thousands of Yazidi women and girls who were abducted, raped and brutalized by jihadists during their assault in 2014.

Older women and men faced summary execution during the IS assault, which the United Nations has described as a possible genocide. Her mother and six of her brothers were killed.

Murad is now UN ambassador for victims of human trafficking and is at the forefront of efforts to protect the Yazidi community — and find justice for the victims of the jihadists, a mission she has embarked on with international human rights lawyer Amal Clooney.

In early December a UN team authorized to investigate the massacre of the Yazidi minority said it would finally start fieldwork next year.

More than 6,800 Yazidis were kidnapped, of which 4,300 either escaped or were bought as slaves, while 2,500 remain missing, according to a recent report from the International Federation for Human Rights (FIDH).

“For me, justice doesn’t mean killing all of the Daesh members who committed these crimes against us,” Murad said in October in Washington, using an Arabic acronym for IS.

“Justice for me is taking Daesh members to a court of law and seeing them in court admitting to the crimes they committed against Yazidis and being punished for those crimes specifically.”

The choice to highlight campaigns against sexual violence comes as a rape scandal has shredded the reputation of the Swedish Academy and led to the postponement of this year’s Nobel Literature Prize.

A Stockholm court on December 3 found the 72-year-old husband of a Swedish Academy member guilty on appeal of two counts of rape, jailing him for two-and-a-half years.

The Nobel Peace Prize — a gold medal, diploma and nine million Swedish Krona (880,000 euros, a million dollars) — will be officially presented in a ceremony in Oslo City Hall at 1200 GMT on Monday.

Other Nobel prizes are set to be handed out on the same day in Stockholm, except the literature prize, which is postponed until 2019. CC