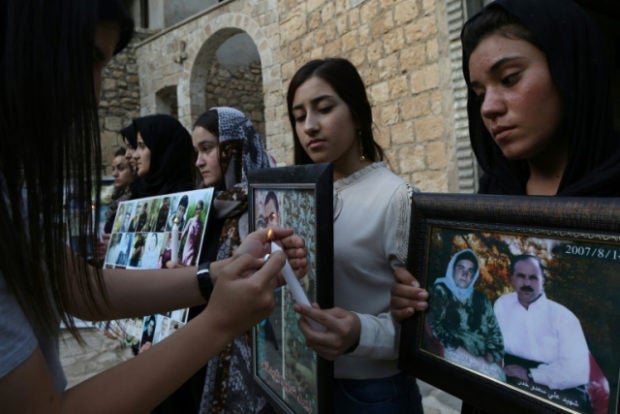 The Yazidi minority was targeted by the Islamic State group. Image: STRINGER via AFP

After surviving torment and rape at the hands of her Islamic State captors, Nadia Murad rebuilt her life at a trauma center in Germany’s Black Forest which became her sanctuary.

It was here alongside hundreds of other Yazidi victims of IS abuse and terror that Murad found her voice and started the journey that saw her honored with this year’s Nobel Peace Prize.

Thousands of kilometers (miles) from their war-battered homes in northern Iraq’s Sinjar region, 1,100 women and children of the Kurdish-speaking minority were resettled here.

The psychologically scarred women are escaped IS captives who were chosen for an emergency asylum program set up in 2014 by the state of Baden-Wuerttemberg.

The women, many of whom were sold as IS slaves, have since received trauma counseling for rape, a taboo subject in the Middle East, under the guidance of Kurdish-German psychologist Jan Ilhan Kizilhan.

“At the beginning here it was very difficult,” said one of them, Lewiza, speaking in a monotone voice about her culture shock when she arrived three years ago.

“I was always afraid, I thought I was going to fall back into the hands of Daesh,” she said, using the Arabic acronym for the jihadi militant group.

The 22-year-old, who declined to reveal her full name, had to rebuild her life from scratch in this picturesque and prosperous corner of Germany near the Swiss border.

“Everything was new to me: undergoing therapy, talking to someone about my condition,” she told AFP. “But every time I speak, I feel much better.”

Sitting beside her, Kizilhan translated her Kurdish into German, a language Lewiza is studying while also training at a hotel school in the region.

It was this Turkish-born German trauma psychotherapist who has helped the women, including Murad, whom he encouraged in 2015 to address the UN Security Council.

Kizilhan sought out the women who were living in refugee camps in northern Iraq under a 95 million euro ($108 million) state program.

It has required psychologists, social workers and interpreters with special training to help those from a culture with very different conventions and sensitivities.

“The terms they use are different,” said Kizilhan, who is also training a new generation of psychologists in Iraq to address the country’s mental health crisis.

In Yazidi culture, as in other Middle Eastern communities, victims of sexual violence can be banished because they and their families are seen to have been dishonored by rape.

In their desperation, some Yazidi women have committed suicide because of their shame and isolation.

To help them, the psychotherapist turned to the Yazidis’ spiritual leader, Baba Sheikh, and asked him to offer a gesture of inclusion to the victims, kissing them on the forehead.

“It is only when one is sure of one’s identity that one can begin a therapy,” said Kizilhan, speaking in his clinic office decorated with amulets to ward off bad luck and a kilim carpet, testament to his Kurdish origins.

Murad was one of the first women to speak, recalled Kizilhan, who had met her in a refugee camp in Iraq.

Broken by the savage violence she had endured, “she was crying a lot and collapsing on the floor,” he recalled.

“But she said to me: I want to talk about what happened to us.”

After three years of treatment, Lewiza has also managed to put into words the pain she has endured, even if her gaze is lost in the distance when she speaks.

The jihadists “have done so much harm all around them, I don’t know if a legal process will be enough to rectify that,” she said.

In his office, also decorated with a green porcelain peacock, one of the most important Yazidi religious symbols, Kizilhan said that although the minority has been battered by violence, it is undergoing a “paradigm shift.”

In “this patriarchal society … it is women like Nadia who have risen up,” he said.

“They are the ones who now lead this society.” CC