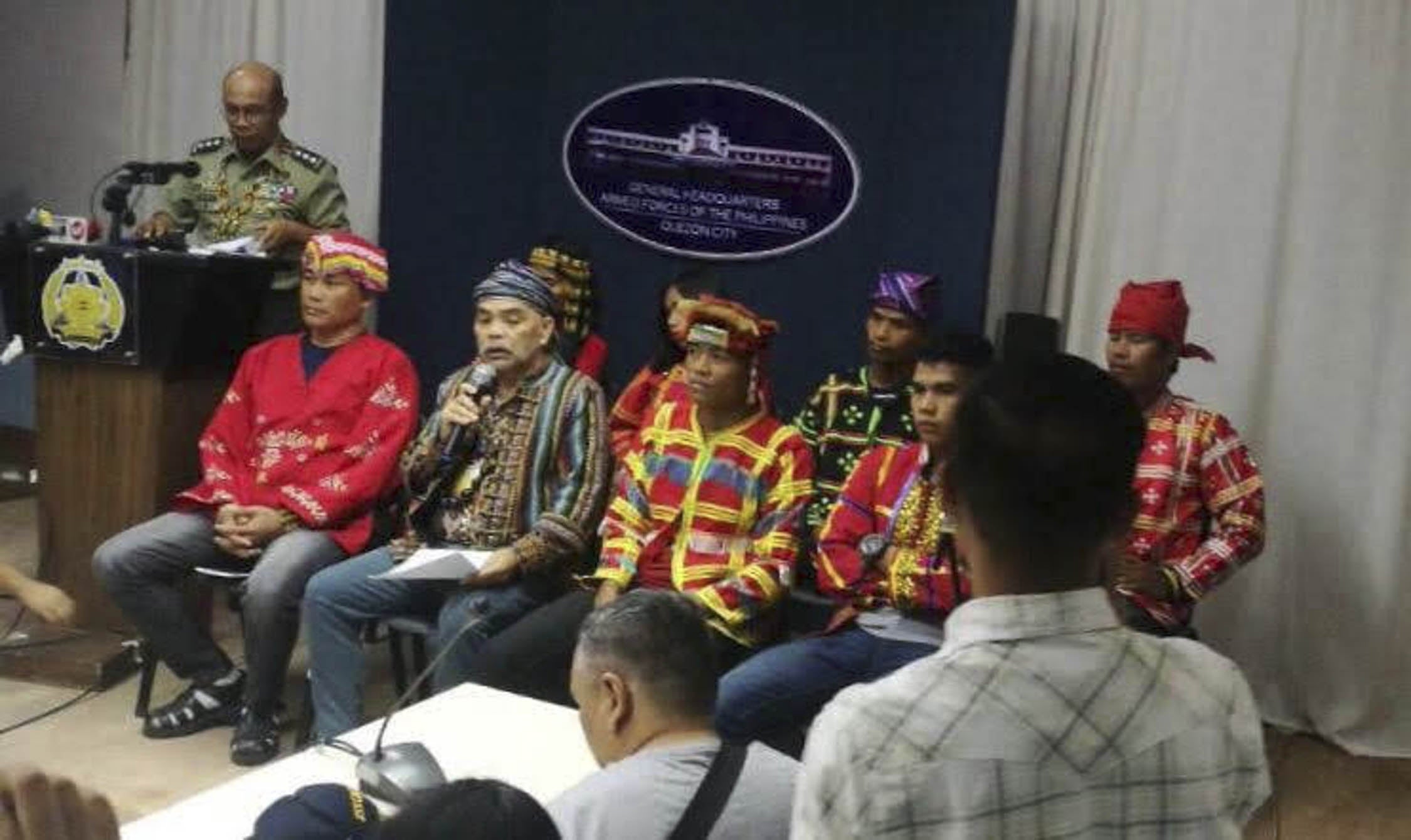 AFP PRESENTATION Several “lumad” (indigenous peoples) leaders and the military allege that many alternative schools are being used to promote the communist insurgency in Mindanao.

A group of “lumad” (indigenous peoples) leaders on Thursday urged the government to shut down scores of community schools in Mindanao, which, they said, were being used by communist rebels to recruit fighters for the New People’s Army (NPA).

The group, led by Mindanao Indigenous Peoples Council of Elders (Mipcel) chair Joel Unad, was presented to reporters by the Armed Forces of the Philippines at Camp Aguinaldo in Quezon City.

In a December 3 resolution, Mipcel asked the government to close down Salugpongan and the Alternative Learning Center for Agricultural and Livelihood Development (Alcadev) schools.

“The unlawful intrusion of Satur Ocampo and ACT party-list Rep. Francisca Castro is a deliberate violation of Republic Act No. 8371 (Indigenous Peoples Rights Act of 1997),” it said.

Ocampo rejected the accusations by the military and Unad’s group.

“It’s ridiculous,” he told the Inquirer. “It’s the first time I was in the area and I haven’t even met the students from that lumad school.”

He said he and the others who were arrested in Talaingod last week merely responded to a distress call from Salugpongan teachers after the paramilitary group Alamara closed the school.

“The AFP always accuses us of using the media for propaganda, but it’s them who are using these people for trial by publicity,” he said.

Ocampo said the AFP chief of staff, Gen. Carlito Galvez Jr., made a “wild accusation” that he and Castro were members of the Communist Party of the Philippines (CPP) and the NPA.

“He should show proof. How can we be NPA when we don’t have firearms?” the former lawmaker said. “His statement is uncalled for, especially with his being named as the next presidential adviser on the peace process.”

Unad claimed that if the Salugpongan and Alcadev schools in Mindanao were not shut down, “10 years from now, every student in those schools will be armed.”

One of the lumad leaders, Bae Diwata, backed his statement, claiming that “70 to 80 percent of the CPP-NPA-NDFP (National Democratic Front of the Philippines) will come from our tribes … (and) we would lose our children.”

Other indigenous leaders, however, said those presented by the military had joined the Alamara and were allegedly offered money and a Pajero to destroy the Salugpongan schools.

“That’s why they want to totally destroy us because they would not get their Pajero and their money if they could not close the school and send us away,” Datu Kaylo Bontulan, a leader of Salugpongan Ta Tanu Igkanugon (Unity to Defend the Land), told the Inquirer by phone.

He said the group was already given a van.

Asenad Bago, 20, a former Salugpongan student, alleged that the number of rebels was “multiplying … because of what Ocampo and these schools are doing.”

When he was a student, he said he learned how to strip firearms, join protests and lie.

Bago said the students were taught a military-oriented alphabet where “A” would stand for “armas (arms),” and “B” for “bala (bullet).”

Sometimes, they were taken to NPA outposts to be shown how to harass military detachments and police stations, he added.

Awing Apoga, 25, a former teacher of the Salugpongan school in Talaingod, claimed they were compelled to teach students to disrespect authority and to be angry at their parents. —WITH REPORTS FROM JEROME ANING, GERMELINA LACORTE AND MART SAMBALUD