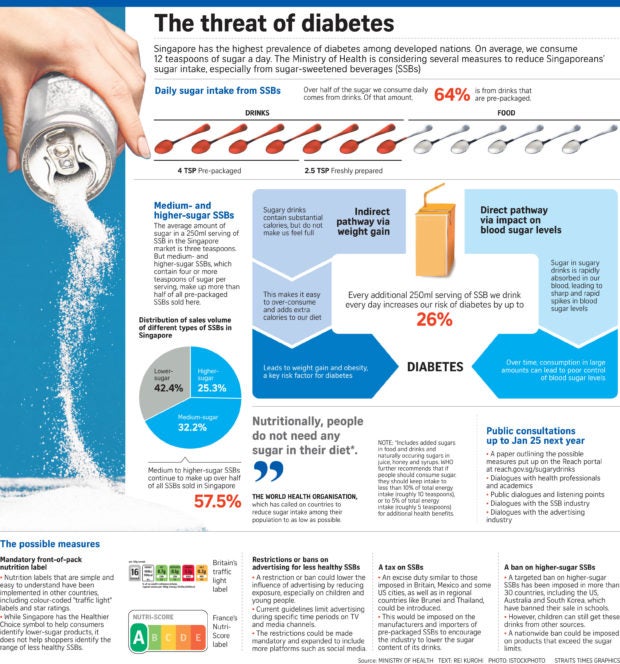 SINGAPORE — Singapore may well become the first country in the world to ban the sale of packaged drinks with high sugar content.

This is one of the moves the Ministry of Health (MOH) is contemplating in its efforts to cut the high sugar intake among people here – a major contributor to obesity and diabetes.

MOH and the Health Promotion Board are seeking feedback on four proposed measures to cut sugar intake from drinks, which include dry three-in-one mixes, cordials, yogurt drinks, fruit juices and soda drinks. Such drinks account for more than half the 12 teaspoons of sugar that people here take each day on average. Many packaged sweetened beverages are loaded with sugar, with one in four containing 5.5 teaspoons of sugar or more.

The four proposals that MOH is seeking views on are:

• A ban on advertisements for high-sugar drinks on all platforms, including social media and buses.

Singapore already does not allow the sale of medium-to-high-sugar drinks in schools and on government premises.

Many companies also refrain from advertising high-sugar drinks to children, for example, during the hours when children are more likely to be watching television.

There is also the Healthier Choice Symbol to identify healthier drinks. But this is voluntary.

The public consultation aims to gauge people’s reactions on pushing these boundaries further.

MOH said that every 250ml of sugar-sweetened beverage daily raises a person’s risk of getting diabetes by 18 percent to 26 percent. This was from various studies, so the amount of sugar in the drink was not indicated.

The World Health Organization (WHO) encourages people to take as little sugar as possible because “nutritionally, people do not need any sugar in their diet”. It said that reducing sugar intake to 25g a day would provide health benefits. This is five teaspoons as measured in Singapore, but six teaspoons according to the WHO.

Experts agreed that a total ban on high-sugar drinks would be the most effective, but also the least politically palatable, measure.

Professor Teo Yik Ying, dean of the Saw Swee Hock School of Public Health, said that the four measures are not mutually exclusive and, together, are “very much in the right direction”.

He added: “Any reduction in sugar intake will directly translate to health benefits.”

Both he and Professor Eric Fin-kelstein of the Duke-NUS Medical School agreed that packaged fruit juices, even those with no added sugar, should not be exempt.

Prof Finkelstein said the tax needs to be broad in nature, or people might substitute one high-calorie drink for another.

Dr Kalpana Bhaskaran, a glycaemic expert from Temasek Polytechnic, noted that both a can of 330ml of soda and a can of apple juice have 36g of sugar, or seven to nine teaspoons.

Ms Gladys Wong, senior principal dietitian at Khoo Teck Puat Hospital, felt the proposed measures do not go far enough. She said: “There must be a fair way to tax freshly prepared beverage outlets, not just the pre-packaged drinks.”

Professor Rob van Dam, an epidemiologist at the Saw Swee Hock School of Public Health, said the high sugar content in drinks adds calories but does not make people feel sated. This makes it worse than sugar in food.

He said a study in Mexico estimated that a 20 percent reduction in sugar would reduce obesity by 12.5 percent. Obesity is a key risk factor for diabetes, heart attacks, stroke and some cancers.