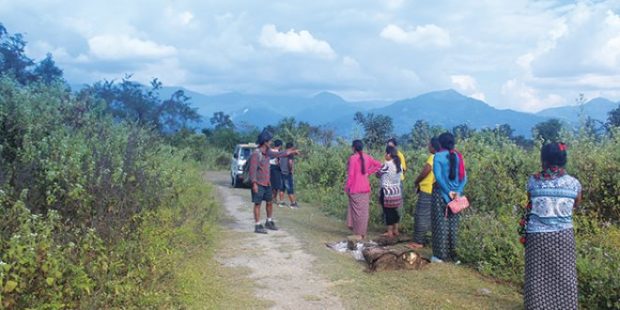 GELEPHU, Bhutan — Gelephu is shaken. People walk in groups and have abandoned the route where an elephant killed a 41-year old man in Pemathang on December 3 evening.

Sources said the incident occurred around 7pm when the victim was returning home after reaching hay at one of his relatives’ place in Pelrithang Khatoed. He had taken the shorter route to walk from Pelrithang to Lekithang, where he lived with his wife and four children. It takes about 20 minutes on foot.

He encountered a herd of elephant after crossing Setikharey and was killed on the spot. Forestry officials said he died of head injury. Bloodstains and few surgical gloves remain at the accident site.

While the elephants damaging crops and properties have been reported frequently in the town, this is the first case of an elephant killing a man in Gelephu this year. The deceased worked as a driver with the Bank of Bhutan.

The route, a wide feeder road that runs through thick bush is a primary route for commuters between Pelrithang, Lekithang and Pemathang.  One of the residents of Pemathang, Rinchen Wangdi, 53 said that more than 50 students walk the route everyday to Pelrithang School. While some students appearing their Class X examination were ferried in taxis yesterday, others walked from a path above the accident site.

“It is risky for everyone taking this route and more dangerous for students,” he said. He said that it is time the local government and other authorities intervene to keep elephants away from settlement.

Rinchen Wangdi said there are many private lands around Gelephu with thick vegetation. Elephants remain in these over growth during the day and come out after dark. “If these bushes are not cleared at the earliest, more lives will be at risk,” he said.

Fear of elephant has compelled farmers in villages around Gelephu to gather their cattle before 3pm from grazing land and complete other activities before dark. Farmers say that while they avoid leaving home after dark, when elephants attack their crops and properties, they have no option but to come out and chase them away.

Indra Kumari Ghalley, 46 said that unless the overgrowth around the settlement is cleared, elephants would not go into the forest. “We’re tired of informing forestry officials. How long will they keep chasing from one village to another?” she said. “The solution to elephant-human conflict should be stronger.”

It has been almost three months since forestry officials in Gelephu have been patrolling to keep elephants away from settlement.  Officials say that besides helping farmers chase the animal whenever reported, forestry officials are able to do little.

“There is a need for intervention from all authorities to address this issue,” a ranger in Gelephu Singye Wangchuk said.

After reporting on the fatal mishap yesterday, a team of armed forestry officials was deployed to Chuzargang county to help farmers chase another herd of elephants. A herd has reportedly entered the settlement area in Norbuling.

Forestry officials from Gelephu range office and officials from the Royal Manas National Park also buried the carcass of an elephant yesterday. The female elephant was found dead near the Taklai River few days ago.

It was found dead just as officials were planning to tranquilize and treat the sick elephant once the district’s veterinary doctor returned from a tour.