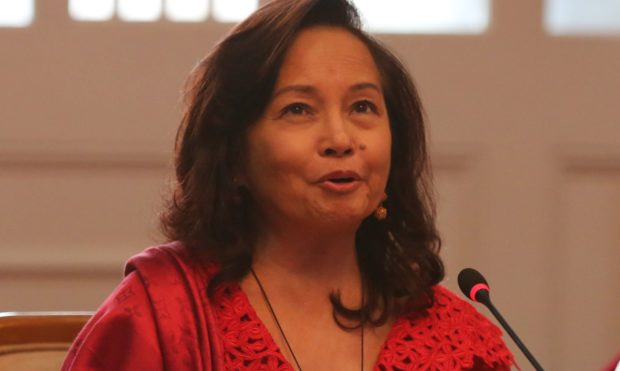 MANILA, Philippines — Malacañang on Thursday said Speaker Gloria Arroyo should explain the alleged P2.4-billion “pork barrel” allotted for her district after last-minute realignments in the proposed national budget for 2019.

Presidential Spokesperson Salvador Panelo insisted that given the hefty amount of the allocation, Arroyo and the others involved in the insertions should justify their appropriations.

“I think we should ask the Speaker why the allocation (in her district) is that large compared to others,” Presidential Spokesperson Salvador Panelo said in a Palace briefing.

“If the Speaker, or anyone involved in the realignment, can justify why there is a need to place that kind of amount in a particular area and the other areas do not need that, then that could be justified,” he added.

However, Panelo, who is also President Duterte’s chief legal counsel, noted that if the budget allocation “is spent outside the real purpose,” the President will certainly vote against it.

“The President can always use the veto power if he feels that there is a need for that,” Panelo told reporters in an interview.

“If he feels that it is in violation of the Constitution, he will do it,” he added.

According to Senator Panfilo Lacson, Arroyo’s district has been allotted P2.4 billion worth of projects after last-minute realignments in the proposed national budget for 2019.

This was revealed in a partial list of pork barrel insertions Lacson presented during the Senate budget deliberations on Wednesday.

During plenary, the senator said lawmakers inserted discretionary funds even after the second reading budget approval.

Lacson alleged that there was grave abuse of discretion on the part of House members, citing the Supreme Court ruling on the unconstitutionality of the Priority Development Assistance Fund (PDAF) in 2013. /je