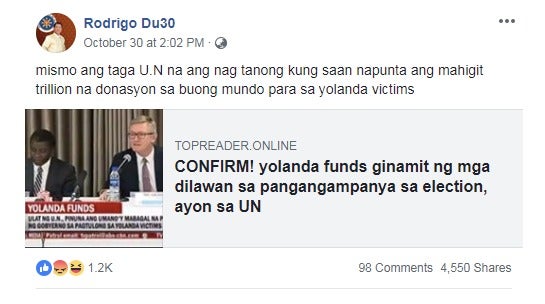 The French news agency debunked a Facebook post on October 30, which claimed of a supposed news report about the misuse of disaster relief funds by the LP for election campaigning.

According to the post, the accusation was made in a press conference held by a United Nations (UN) special rapporteur on the human rights of internally displaced persons (IDPs).

But the AFP said: “The rapporteur told AFP he never made that claim, his report on the Philippines does not make the claim, and the screenshot used in the false post is from a TV news clip available online that does not make that claim.”

The AFP noted the screen grab seen in the misleading post was taken from a press conference in 2015 by Chaloka Beyani, then UN Special Rapporteur on the human rights of IDPs.

“He visited the Philippines in July 2015 to look into a range of issues in relation to internally displaced people, and presented a report on his findings to the United Nations,” the French news agency said. “Beyani gave a press conference at the end of his trip.”

It added the screen grab in the Facebook post was from a 16-second clip from a report on Yolanda funds by ABS-CBN.

The ABS-CBN report raised “criticisms about the government’s relief efforts” for victims of Yolanda and showed “some footage from Beyani’s press conference but it does not quote him directly,” the AFP, however, noted.

The AFP said Beyani clarified he did not criticize the LP during the press conference.

“Neither my statement nor my report made any mention of the use of funds for rebuilding the areas affected by Typhoon Haiyan by a political party,” Beyani told AFP in an email.

“It is regrettable that part of the video of my press conference was used to cover this allegation. I categorically did not say that at all,” he added.

The current UN special rapporteur on the human rights of IDPs, Cecilia Jimenez-Damary, also said no allegations of misusing relief funds “had been made against the Liberal Party nor Aquino,” apparently referring to former President Benigno S. Aquino III, a stalwart of LP, which is now a political opposition under the Duterte administration.

“The office of the UN Special Rapporteur on the human rights of IDPs, as an independent mandate and based on the visit of Prof. Chaloka Beyani to the Philippines in 2015, has not stated that the Liberal Party nor Aquino used the Haiyan funds for their election campaigns,” Jimenez-Damary told AFP in an email.  /kga