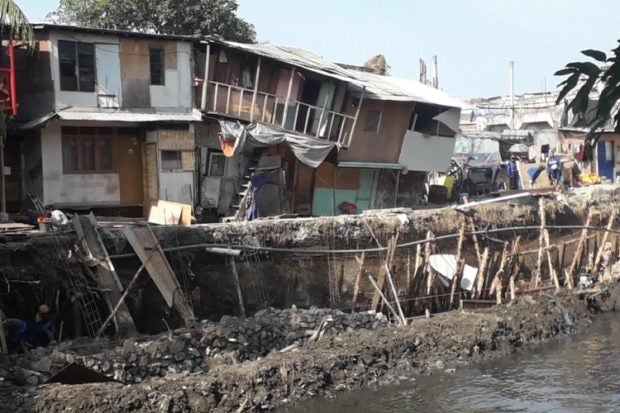 JAKARTA — Jakartans may see a quarter of the capital submerged with water in the next decade.

More than a quarter of Jakarta’s 661.52 square kilometers will be submerged by water in less than a decade, as the sprawling capital will continue to sink rapidly if no significant measures are taken to ensure the survival of the city, experts have warned.

Seawater could cover as much as 26.86 percent of Jakarta by 2025 and if this trend continues, 35.61 percent of the city will be completely submerged, according to a study by the geodesy research division of the Bandung Institute of Technology (ITB).

“North Jakarta alone could be 90 percent underwater by 2050,” a member of the team Heri Andreas told The Jakarta Post on Tuesday.

The city’s looming submergence, according to the study, was not primarily caused by rising sea levels but by the sinking of city itself.

Like many other global cities in the world, overuse of ground water has served as the leading cause of Jakarta’s problem.

The issue was also highlighted by a study conducted by the University of Indonesia’s (UI) math and sciences department.

UI geophysicist Syamsu Rosid said that recently published 4D microgravity research of Jakarta’s soil revealed an alarming rate of land subsidence, especially in North Jakarta. The method registers land subsidence by recording the gravitational strength of an area over the course of four years from 2014 to 2018.

“The research shows the most affected area is on Jakarta’s coast, as North Jakarta is sinking approximately 11 centimeters per year because of human activities, especially over exploitation of groundwater,” he told the Post, adding that it could affect the stability of buildings and infrastructure in addition to increasing the risk of tidal flooding as the land was now under sea level.

Jakarta’s piped-water service only covers 60 percent of the capital, according to data from Jakarta tap water company PAM Jaya. That means the remaining 40 percent of the city relies on groundwater.

Poorly enforced regulations have also led to excessive illegal groundwater use, and not only by residents. Data from the Jakarta Industrial and Energy Agency show that 4,231 commercial buildings, such as hotels and offices, in the city still use groundwater.

Besides the uncontrolled usage of groundwater, land subsidence has also been aggravated by a lack of green spaces, as concrete and asphalt prevents the absorption of water into the soil. As Jakarta is crossed by 13 rivers, the city’s soil is also made up of alluvium, or sediment, deposited by rivers, which is loose and susceptible to erosion.

“Looking at those factors, we really urge the city administration to reevaluate its spatial plan (RTRW),” Syamsu said adding that all parties needed to follow the designated zones set in the RTRW.

North Jakarta is home to 1,696,015 residents, according to 2015 population data. In addition to being the area worst affected by land subsidence, it is also arguably the area where the socioeconomic gap between residents is the most apparent in the city, with slums only a stone’s throw away from elite gated communities like those in Pluit, Pantai Indah Kapuk and Kepala Gading. The country’s busiest port Tanjung Priok, as well as the city’s industrial areas are also located in North Jakarta.

Jakarta Governor Anies Baswedan had said that the city administration and central government had taken measures to prevent further land subsidence, including by continuing work on a sea wall as part of the National Capital Integrated Coastal Development (NCICD) in Jakarta Bay to protect the city from tidal flooding. He also claimed the city had focused on expanding infiltration wells to help the soil better absorb rainwater.

Jakarta Industrial and Energy Agency acting head, Ricki Marojahan Mulia, said the agency had built up to 1,333 infiltration wells throughout the city, although he did not elaborate on how exactly expansion would continue given the city’s densely populated nature.